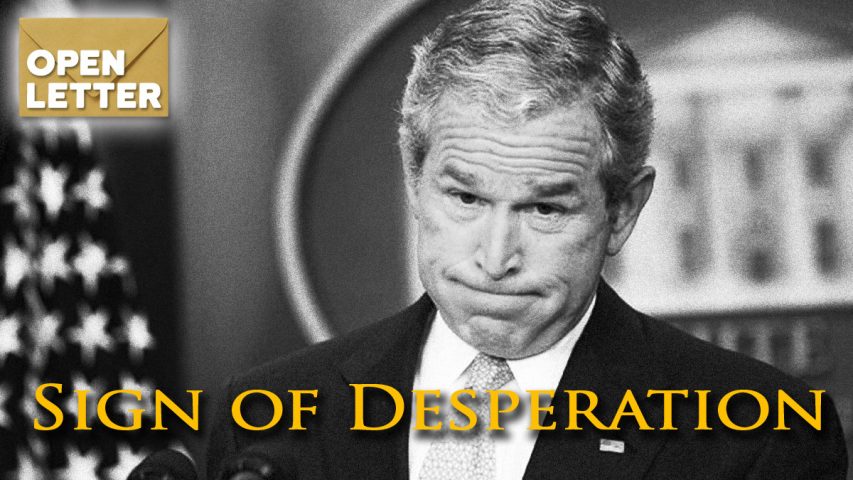 Open Letter by Matthias Rath, M.D. to US-President George Bush and to the People of the World!

“As the physician and scientist who was privileged to contribute discoveries that make the eradication of cardiovascular disease by natural means possible and save millions of lives, I am asking you: could it be that this war is not about fighting ‘terrorism’ or conquering oil fields but about protecting the largest investment industry – the pharmaceutical industry – from collapse?”

Dr. Matthias Rath is the physician and scientist who led the breakthrough in the natural control of cardiovascular disease and cancer. He is member of the New York Academy of Sciences and other renowned scientific organizations. 10 years ago, the late Dr. Linus Pauling, recipient of the Nobel Prize in Chemistry and Peace stated: “Your discoveries are so important for millions of people that they threaten entire industries. One day there may even be wars just to prevent this breakthrough from being widely accepted. This is the time, when you need to stand up!” – This time is now.-

Millions of people worldwide are waking up to the fact that the pharmaceutical industry is an investment industry based on the continuation of diseases.

The survival of the pharmaceutical investment industry is threatened by four main factors:

While many events led up to the current crisis, none was as threatening to the survival of the entire pharmaceutical industry as the scandal around Bayer’s cholesterol lowering drug Baycol.

In August 2001 Bayer had to withdraw its leading new drug Baycol because more than 50 people had already died from taking it and more than 6 million patients were at risk from the deadly side effects of rhabdomyolysis (dissolving of muscle tissue). British pharmaceutical multinational Smith Kline Beecham (SKB) was Bayer’s global marketing partner.

Bayer – a century old flagship of the pharmaceutical industry – and British SKB – the world’s second largest drug maker – were faced with crippling lawsuits and other devastating economic consequences:

The Baycol scandal was only the beginning of a ‘domino effect’. Within weeks many multinational drug companies were faced with lawsuits from patients suffering severe side effects from taking other pharmaceutical drugs (beta blockers, calcium antagonists, estrogen replacement, etc).

But then everything stopped on September 11, 2001. On this day global attention shifted away from the crisis facing this industry.

Since then, the main goal of the Bush administrations has become to secure the survival of the pharmaceutical industry through:

The war against Iraq is not primarily about fighting ‘terrorism’ or conquering oil fields. It is part of a long-term strategy of the pharmaceutical/petrochemical investment groups to create the psychological state of fear to maintain global control.

Long term international conflicts, wars – even the use of weapons of mass destruction – can be used to achieve this goal and suppress any opposition.

This war is not a sign of strength – but of desperation

70 years ago, this week, an event shocked the world and set the stage for the last World War. On February 28, 1933 the German parliament building, the Reichstag, was set on fire.

The official version that ‘terrorists’ had led the attack was soon questioned abroad. Today it is a fact that the Reichstagsbrand was deliberately used as a pretense and that the ‘empowerment laws’ following this event had been prepared in advance.

Following the burning of the Reichstag:

The Reichstag-Assault in 1933 provided the legal platform for 12 years of dictatorship and WWII. Its main benefactor was IG-Farben, the largest European petro-chemical Cartel seeking control of the oil and chemical industry worldwide.

In the Nuremberg War Tribunal in 1946/47 this Cartel was tried for ‘conquest’, ‘robbery’ and ‘slavery’ and – as a result – it was dismantled into Bayer, BASF and Hoechst.

This War Tribunal established that without these corporations, World War II would not have been possible. US-Chief Prosecutor Telford Taylor stated: “If their guilt is not brought to the daylight, they will do even more harm in future generations.”

Then and now millions of decent people are in danger of being mislead by their own governments. And those who do not learn the lessons from history are doomed to live through it again!”