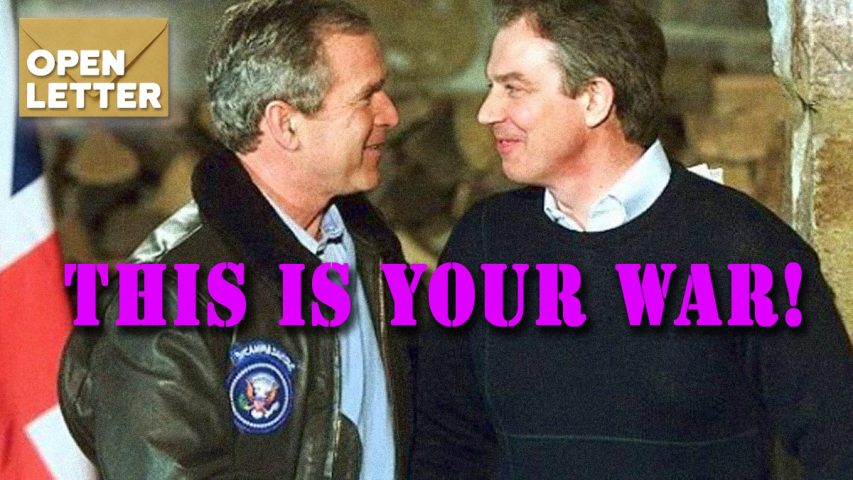 This War is neither a vocation nor a ‘mission from God’ – this is Your War!

Your War is against the interests of six billion people!

Your War is against the declared will of over 180 countries of the United Nations!

Your War is against international law! It is neither morally nor ethically justified!

Your War is against the will of the overwhelming majority of the American people, many of whom approve only because you sent their sons and daughters to the battlefield. No one believes the polls!

Your War is against the interests of every American because it will be fought with weapons of mass destruction. In an attack war involving nuclear or bio-logical weapons – that does not have the support of the world community – you as the instigator carry all responsibility. No matter what weapons of mass destruction explode, no matter where and on which side – the American people, the entire world will point at you.

But the World also knows the true motifs for Your War: This War is in the interests of the pharmaceutical and oil industry!

Your War serves the interests of the investment group behind both these industries, namely the Rockefeller-financed Trilateral Commission who paved the way for your political career. Your War is Their War !

George Bush and Tony Blair are the heads of the two leading export nations of pharmaceutical products. Two out of three drugs sold anywhere in the world come from these two countries. The pharmaceutical / petrochemical industry was a main contributor to their election campaigns.

In recent years the pharmaceutical industry has been exposed as a multi-trillion dollar ‘investment business with disease’ the future of which is dependent on the continuation and expansion of diseases.

I. THE GOAL OF THE PHARMA-CARTEL:

II. THE MEANS TO ACCOMPLISH THIS GOAL:

III. PRECONDITIONS TO ACHIEVE THIS GOAL:

Since 1). there is no international legitimization for this war and 2). the pharma-cartel’s plan is now public, both preconditions failed and their goal can no longer be achieved. Starting a nuclear, biological or chemical war will sacrifice millions of people without the pharma-cartel reaching its goal!


Every family in America, Great Britain and anywhere else in the world should be aware of that and act immediately!

One day, those politicians and executives supporting this war – against any mandate by international law – may be held accountable by courts, including the World Court for War Crimes in The Hague that was inaugurated on March 11 this year.