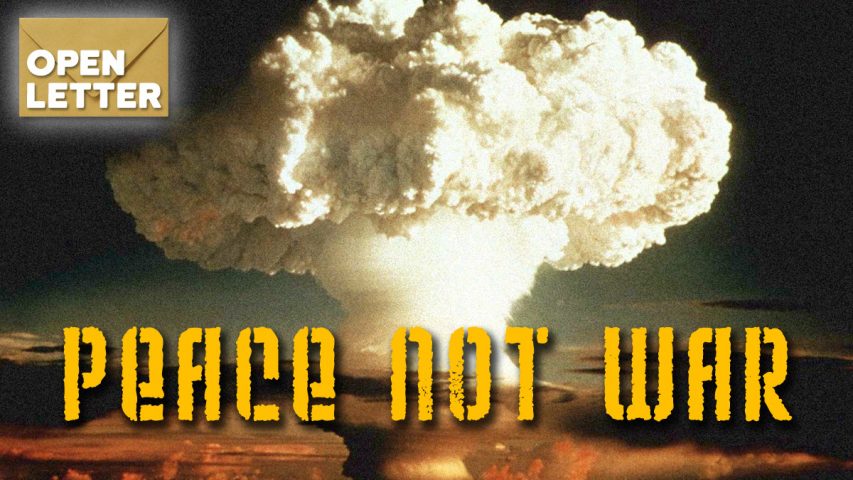 Open Letter by Matthias Rath, M.D. to the American People and to the People of the World!

“As the physician and scientist who was privileged to contribute discoveries that make the eradication of cardiovascular disease by natural means possible and save millions of lives, I am asking you: could it be that this war is not about fighting ‘terrorism’ or conquering oil fields but about protecting the largest investment industry – the pharmaceutical industry – from collapse?”

As the physician and scientist who was privileged to contribute discoveries that make the eradication of cardiovascular disease by natural means possible and save millions of lives I raised my concerns in an Open Letter published in the New York Times on February 28.

I raise my voice once again on behalf of millions of people who are deprived of life saving natural health information, which threatens the multi-trillion dollar pharmaceutical investment business of patented drugs.

Dr. Matthias Rath is the physician and scientist who led the breakthrough in the natural control of cardiovascular disease and cancer. He is member of the New York Academy of Sciences and other renow-ned scientific organizations. 10 years ago, the late Dr. Linus Pauling, recipient of the Nobel Prize in Chemistry and Peace stated: “Your discoveries are so important for millions of people that they threaten entire industries. One day there may even be wars just to prevent this breakthrough from being widely accepted. This is the time, when you need to stand up!” – This time is now. –

Only 24 hours after my previous Open Letter was published in the New York Times on February 28, the ‘master mind’ behind ‘September 11’ was presented to a stunned global audience. After entire armies had searched for him for one and a half years, he was found while asleep in an apartment in Pakistan. – Is this a coincidence?

My Open Letter published in the New York Times one week ago revealed for the first time:

Unbeknown to most people, the very same industry has been leading another war for decades. According to the Journal of the American Medical Association (April 15, 1998) in this ‘war’ every year more than 100,000 people die and more than 1,500,000 are hospitalized from the side effects of harmful prescription drugs.

In this ‘war at home’ people are harmed in several ways. They are promised ‘health’ but they receive drugs that do not cure, only cover symptoms. Moreover, millions of patients and entire economies are financially ruined for the sake of the huge profit margins of this investment industry. All of this is no surprise, because the continued existence of diseases and their expansion is a precondition for further growth of the drug industry. Prevention and eradication of diseases undermines the investment nature of this business.

With its current 400 billion dollar ‘Medicare’ plan, the Bush Administration is making further concessions to the pharmaceutical ‘investment business with disease’ at the expense of millions of patients.

The cornerstones of a new patient-oriented, effective and affordable health care are available:

Mankind is currently going through one of the greatest advances in its history. Two out of three of today’s diseases can largely be eradicated if the scientific knowledge currently available in the area of natural non-patentable health is implemented in any health care system.

Over 400 years ago, a similar quantum leap took place in history. During medieval times 80% of the people living in Europe were illiterate. The invention of the printing press together with the translation of the bible into spoken languages allowed millions of common people to learn to read and write.

Knowledge was power and the rulers at that time did not want to share their power with the people. They wanted to preserve their feudal economic privileges and met the ‘liberation from illiteracy’ with utmost brutality. In the ’30-Year War’ (1618-1648) they destroyed half of Europe and killed millions of people in an attempt to bring back Medieval Times. All was in vain because the people no longer wanted to live in illiteracy and dependency.

Today we are facing a ‘liberation’ of similar magnitude – but global in its scope.The possibility to liberate mankind from cardiovascular disease, cancer and many other diseases by natural, non-patentable means threatens the very existence of the multi-trillion dollar pharmaceutical investment industry.

As we are all witnessing, today’s ‘economic rulers’ are not willing to give up their economic privileges voluntarily. Just as they did 400 years ago they are willing to sacrifice the lives of thousands, even millions of people in their own decline.

There is one difference worth noting. Centuries ago, wars were fought with pitchforks and muskets Today they are fought with weapons of mass destruction including nuclear weapons.

Millions of people living today in America and in every other country of the world have to make a decision: Do we really want this to happen? If not, the time to act is now!

With the multi-trillion dollar pharmaceutical investment industry as the largest corporate benefactor behind the current ‘war on terrorism’ revealed and in broad daylight for the world to see, what are the options left for this interest group? When the first nuclear or biological weapons detonate – who will be blamed? Who will accept the arguments that civil liberties need to be abandoned and press freedom abolished?

This interest group and its political stake holders have to realize: Whatever they do now – including any military action – their goal is now publicly exposed and can no longer be achieved.

All of us, the people of America, the people of the world now have the great opportunity and responsibility to help build a healthier and more peaceful world. Now its up to us !

“The Time to Protect Our Health and Our Lives Is Now!”