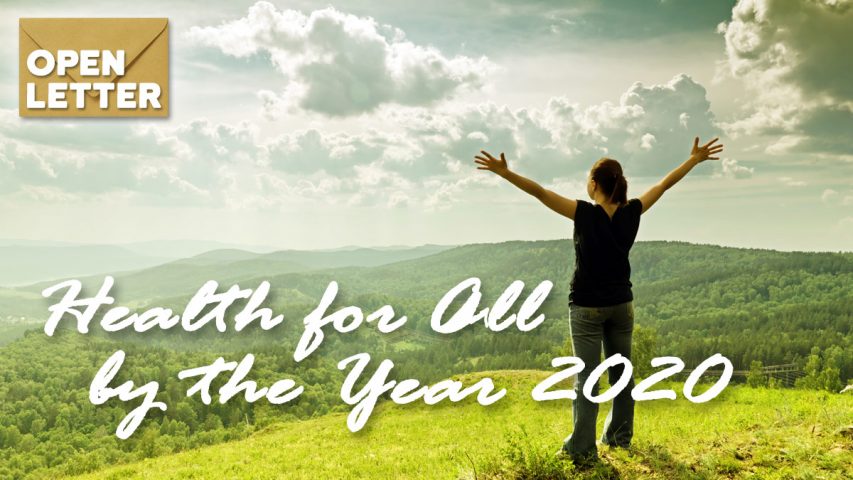 The war against Iraq has just started and there is already a winner: the people of the World. Over the past weeks we have informed the people in America and the rest of the World about the background of this war and its main corporate benefactor – the pharmaceutical industry.

This information was first published in ‘The New York Times’, in the city where political leaders had congregated at the United Nations over the recent months like rarely before in history. International tension and the escalation to war created a climate where the information about the pharmaceutical industry as the main benefactor of the ‘war against terrorism’ spread like a bush fire.

The global spread of this information was also an important reason why small countries in the Security Council – unexpectedly – resisted the pressure by the United States and British administrations, denying them any mandate and any support by international law for their war.

Now, the war led by the Bush and Blair administrations can no longer reach its primary political and economic goal – that is to impose the monopoly of the multi-trillion dollar pharmaceutical investment business with disease on the people of this planet for generations to come.

As the scientist whose discoveries enable us to control today’s most common diseases by natural means and having unmasked the corporate benefactors behind the current war, I consider it my responsibility to issue a call to the people and the political leaders of the world to immediately start building a ‘World without Disease!’

Every country that focuses its health care system on effective, natural, non-patentable health approaches is an important step towards a healthier and more peaceful world. You can follow the liberation of mankind from the yoke of the pharmaceutical ‘investment business with disease’ here.

The latest example of the failure of the World Health Organisation (WHO) to serve the health interests of the people of the world is its incomplete information policy in the face of the SARS (Severe Acute Respiratory Syndrome) epidemic.

It is a scientific fact that all viruses can be blocked by specific essential nutrients. The natural substance ascorbic acid (vitamin C) is known to decrease or block the replication of all viruses it is applied to. Viral diseases are essentially unknown in the animal world, because most animals – as opposed to man – produce high amounts of vitamin C in their body. Moreover, all viruses spread in the body by using the same enzymes (collagenases) which can be partially or completely blocked by means of the natural amino acid lysine.

The fact that the WHO is failing so seriously in disseminating live-saving information on natural, non-patentable health measures is no coincidence. It reflects the fact that the WHO is not primarily serving the health interests of the people but is apparently instrumentalized by the pharmaceutical industry. This investment industry continues to sacrifice the health of the people of the world to the trillion dollar “business with disease” based upon patentable drugs.

But the people of the world have decided to no longer live in dependency from this industry.

Mankind now has an unique opportunity to liberate itself from today’s most common diseases.

WHY THIS DID NOT HAPPEN EARLIER

At the beginning of the 21st century mankind wakes up to a nightmare. A hundred years ago the Rockefeller Group, already controlling the global oil business at that time, defined another global investment market: the human body and the diseases it hosts.

The return on their investment became dependent on the patentability of drugs and the respective patent royalties. Under the umbrella of ‘philanthropy’ and ‘benefactors to mankind’ the greatest deception in the history of mankind was strategically developed.

Millions of patients were promised a ‘cure’ for their health problems, but the vast majority of the ‘remedies’ sold had no proven efficacy, at best they covered symptoms. By triggering an epidemic of new diseases from drug side-effects, these deceptive products constantly expanded the ‘disease market’.

A strategic precondition for this new market was the elimination of ‘competition’ from effective natural therapies. The basic knowledge about the essential nutrients required for optimum cellular metabolism was systematically eliminated from medical schools, the textbooks of medicine and from the minds of generations of doctors.

Over several decades the pharmaceutical business with disease became the largest investment industry on planet earth. The huge profits were used to gain influence in all areas of society, including science, medicine, media and politics. Even the largest international bodies did not resist its influence.

The World Health Organization was founded more than 50 years ago to promote health on a global level. A first focus was to improve health through nutrition, including micronutrients. Within two decades the influence of the pharmaceutical cartel had shifted this focus. By abusing the WHO and other UN organizations (e.g. ‘Codex Alimentarius’) this industry is trying to impose global protection laws to protect and promote the pharmaceutical investment business with patented drugs from being eliminated by mostly superior, but non-patentable natural therapies.
As the direct result of this silent ‘take over’ of control of global health care by the pharmaceutical industry during the past century, hundreds of millions of people have died from diseases that could have vanished long ago – if not for the multi-trillion-dollar pharmaceutical investment ‘business with disease’. Today, more than two billion people suffer from micronutrient deficiencies in the developing world alone. Thus, all of us must now work towards building a new world health organization that liberates us from today’s most common diseases.

WE NEED A NEW HEALTHY AND PEACEFUL WORLD

Health is a basic human right. We, the people of the earth will not allow this right to be withheld from us any longer. We will not rest until the right to health – particularly the unrestricted access to natural therapies – has become a human right for all people of the world, guaranteed by national and international constitutions.

I call upon every person on earth: No matter where you live and what you do you should start building this new world right now! Every living room, every doctor’s office or hospital, every school, university, community center, every education text book or movie that promotes natural health is a first step towards creating a healthier world. By constructing this new world we not only eliminate entire diseases but also release billions of dollars in funds that are currently wasted for promoting disease and destruction.

I call upon the political leaders to implement natural health as the basis of a prevention-oriented national health care policy. Now that this scientific knowledge is available around the world, you must use it to improve the health of your people. Every country that redirects its health care towards natural health is a quantum leap forward towards a common goal: Health for All by the Year 2020™.
There is no time to be lost!
Sincerely,

You have the choice to live in today’s world of disease and war. Or you can help build a world of health and peace. For this new world you need to stand up!