President Bush, Don’t Nuke Iran Or North Korea To Cover Up The Lies About The Iraq War!

Constitution for a Healthy and Peaceful World 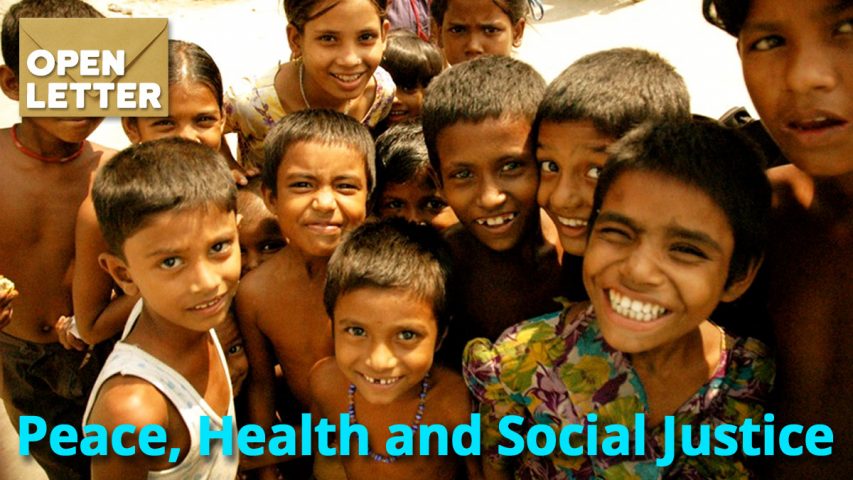 Today the people of the world realize that they were deceived about the true reasons behind the war on Iraq. Those politicians who started this illegal war have lost all credibility. Yet some heads of states are already compromising with those who continue to escalate the international crisis. By doing this, they act against the will of their own citizens.

Over the past weeks I have informed the people in America and the rest of the world about the hidden agenda behind the war against Iraq.

There are at least two battlefields:

This is the struggle of the pharmaceutical investment industry for the survival of its ‘business with disease’. This battle is not immediately recognizable for everyone. At stake are not millions or billions of dollars – but in the long term hundreds of trillions of dollars.

Once people around the world recognize the organized deception underlying the pharmaceutical industry, they will demand to put an end to such a business and hold its directors, investors and political supporters accountable.

In order to prevent this from happening, this multi-trillion dollar investment business needs worldwide emergency legislation and protection laws, which could never be passed in peace-times.

For this very reason its political stake-holders are organizing a second battlefield:

This is the psychological, political and military escalation of crisis and war at a global scale. The main purpose of this strategy is to divert attention from the ‘Battlefield No. 1’, create a global psychological state of fear as a precondition for abandoning civil rights and implementing protection laws to win the main battle. It is precisely for that reason that this second battlefield is being openly implemented now and escalated on a global scale.

The strategic aim of these special interests around the Rockefeller investment group and their political stakeholders is to escalate the current international crisis to a level where weapons of mass destruction are used.

The use of weapons of mass destruction would immediately cause a global psycological paralysis. Such a situation is the only scenario in which it would be possible to curtail civil rights and establish the required protection laws not only in one country – but worldwide.

This is why we do not live in post-war but in pre-war times. And this is why the people of the world need to unite in order to prevent this from happening. The time has come to start building a new world of peace, health and justice.

Constitution for a New World of Peace, Health and Social Justice

At the beginning of the third millennium mankind stands at the crossroads. On the one hand are the interests of six billion people currently inhabiting our planet – and of all future generations – who wish to live a dignified and healthy life in a peaceful world. On the other hand is a small corporate interest group denying the whole of mankind these basic human rights for one reason only – financial greed. In this situation, we, the people of the world, have the choice: we either continue accepting the yoke of those investment industries forcing wars and diseases upon us or we liberate ourselves from these burdens and start building a world determined by the principles of peace, health and social justice.

We, the people of the world, recognize that never before in the course of history have we been more united to preserve peace, to terminate the investment ‘business with disease’ and to bring to justice those who sacrifice peace and health for corporate gain.

Therefore, we the people from East and West, North and South, from rich and poor countries have decided to create a world of peace, health and social justice for ourselves and generations to come.

As our fundamental rights we proclaim:

THE RIGHT TO PEACE. We, the people of the world, are determined to defend our right to peace with all means available. In the age of weapons of mass destruction war is no longer an option for solving international conflicts. We will make sure that those who conduct wars without an explicit mandate by international law will be held responsible and will be brought to justice. We will not rest until this is accomplished because we recognize that this is the only way to protect our planet from destruction.

THE RIGHT TO LIFE. We, the people of the world, are determined to defend our right to life with all peaceful means available. We will not rest until all factors shortening the life span of people on our planet are eliminated. We will fight hunger, malnutrition and other factors already killing millions of inhabitants of our planet each year including infants and children. We will also terminate the ‘investment business with disease’ as the result of which more people have died prematurely from preventable diseases than in all wars of mankind put together.

THE RIGHT TO HEALTH. We, the people of the world, are determined to defend our right to health with all means available. We will make sure that the pharmaceutical ‘business with disease’ the deliberate promotion of diseases for corporate gain, is outlawed worldwide. We will hold responsible those who deliberately promote diseases and those who withhold live-saving information on natural, non-patentable therapies. In providing health to our communities and in implementing national health care programs we will focus on effective and safe, natural health approaches. The primary goal of any health care strategy is prevention and eradication of diseases.

THE RIGHT TO SOCIAL JUSTICE. We, the people of the world, are determined to defend our right to social justice with all peaceful means available. We no longer accept that two out of three inhabitants of our planet live in poverty and illiteracy. We will make sure that the resources of the world are redistributed in a way that provides education and a dignified life for every citizen of our planet. To finance this redistribution we will use the financial resources liberated from terminating the multi-trillion dollar ‘business with disease’ and from decreasing military expenditure. We recognize that as a precondition to establish these important human rights those interest groups promoting war and disease need to be brought to justice in international courts for sacrificing the lives of millions of people and for committing other crimes against humanity.

This will remove the last obstacle for the people of the world to terminate the ‘Dark Ages of Disease, War and Injustice’ and start building a ‘New World of Peace, Health and Social Justice’.

On behalf of the people of the world –

WHAT WE, THE PEOPLE, MUST DO

“All that is required for evil to prevail is for good men to do nothing.“ Edmund Burke, Politician and Writer (1729-1797)

My Open Letters in the New York Times and other leading international newspapers before the Iraq war contributed to the accomplishment of two goals. First, the public exposure of the pharmaceutical agenda behind this war helped to deny any mandate by international law for this war. Secondly, I publicly warned that any use of weapons of mass destruction could be abused. If such a plan had ever existed, my warning exposed such intentions and rendered them too risky to execute.

Moreover, only 11 days after my first Open Letter was published in the New York Times on February 2 this year, the Attorney General of New York filed lawsuits against leading pharmaceutical companies for fraudulent business practices. On March 31, Europe’s leading weekly newspaper ‘Der Spiegel’ called the pharmaceutical business an organized fraud scheme, British TV aired ‘Dying for Drugs’ and on May 18 the New York Times published a groundbreaking article ‘Trial Lawyers Are Now Focusing on Lawsuits Against Drug Makers’.

Thus, while the Bush administration won a war in Iraq militarily they lost their credibility and they are about to lose their main battle that is being fought on behalf of the pharmaceutical cartel.

Because they did not reach their goals during the Iraq war, these special interest groups and their political stakeholders will continue to escalate the international crisis.

However, because their ‘game plan’ is now revealed, their next steps are predictable. Most importantly, because we, the people, now know these plans, we have a chance to stop them. These plans include:

If the people in America allow these plans to proceed, free and democratic elections in November 2004 are threatened. Until then, all peace talk has to be tested to see whether it is genuine or just another deception.

WHAT WE MUST DO NOW

The pharmaceutical industry promotes the expansion of diseases – not their prevention. For more and more diseases there are effective natural, non-patentable alternatives. Every family, every doctor’s office, hospital or health care system that applies natural therapies helps to improve health and decrease the dependency from the pharmaceutical investment business. Entire countries are already refocusing their national health care system on preventive measures including natural and nutritional health. With every dollar less, the ability of this interest group to manipulate public opinion and to buy political influence diminishes. Every dollar less for the pharmaceutical cartel makes the next war less likely.

COME TO ‘THE HAGUE’