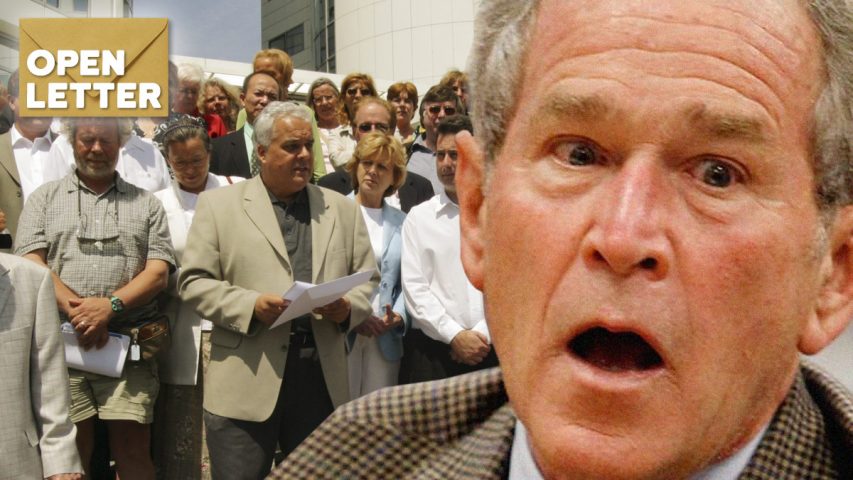 Dr. Rath’s first Open Letter in the New York Times was published in February 2003 and public reactions to the consistent themes that have been woven throughout this continuing campaign have been closely monitored.

“You have the choice: You can continue sacrificing your health and life for the perpetuation of the Pharma-Fraud business – or, you can take action now to eradicate today’s most common diseases and terminate the Pharma-Fraud.”

Within 24 hours of publication, the terrorism alert level in the readership area of the NYT is raised to ‘orange’.

“George Bush will go into history as the politician who successfully helped destroy the United Nations. This was not a random act. He completed a plan outlined in earlier strategy papers including the Project for a New American Century by Wolfowitz, Cheney, Rumsfeld and others holding top positions in the Bush administration. Now, in June 2004 their mission was accomplished.”

“The motives behind 9/11 and the Iraq war are now evident for everyone and the first dissidents are speaking out. Imagine, what will come to light if the White House is turned over to a new administration. This would be the end of the special interest groups, above all the pharmaceutical industry. ”

One day later, the 911 Commission insists Condoleeza Rice testify under oath because of discrepancies between her statements and those made in sworn testimony by Bush’s former counterterrorism chief.

“Just as the principle of ‘One Man One Vote’ abolished Apartheid in South Africa and showed that country a future of reconciliation it is now time for You to raise Your voice and establish a true World Parliament. If You do not act now this opportunity may be lost for generations to come.”

The UN General Assembly finally shows its muscle and tells Israel to stop building the security barrier. The US votes against the resolution.

“Instead of granting immunity to those politicians responsible for starting illegal wars of aggression you must bring them to justice before the International Criminal Court (ICC) in The Hague which started its work this year with precisely that purpose.” — Read Open Letter here

On the same day, September 7, 2003, Bush addresses the nation and tries to defend his actions

On the next day Annan summons the veto country leaders to the UN summit in Geneva on September 13.

“If the United Nations General Assembly lets the UN-Security Council cave in to US pressure and – retrospectively – legitimize the attack war against Iraq, it will have destroyed the very basis of the United Nations existence – to ban of wars of aggression. ”

On August 14, 2003, New York City – the seat of the Parliament of the World, the United Nations – and other cities in Northeastern America covering the main distribution area of The New York Times were hit by a sudden power blackout. On that very same day, The New York Times had published as an advertisement my recent Public Appeal that the world community needed to bring to justice those politicians that threatened the very existence of the United Nations, its Charter and its Code of International Law.

Five days later the UN mission in Baghdad is bombed.

“We, the people of the world, recognize that never before in the course of history have we been more united to preserve peace, to terminate the investment ‘business with disease’ and to bring to justice those who sacrifice peace and health for corporate gain.”

“I am asking you: could it be that this war is not about fighting ‘terrorism’ or conquering oil fields but about protecting the largest investment industry – the pharmaceutical industry – from collapse?”

Only 24 hours after Dr. Rath’s Open Letter was published in the New York Times, the ‘master mind’ behind ‘September 11’ was presented to a stunned global audience. After entire armies had searched for him for one and a half years, he was found while asleep in an apartment in Pakistan. – Is this a coincidence?

“On the eve of a possible world war, I am calling upon you to stop any military action! Make Health – Not War! This war is not in the interests of the people of the world, but is in the special interests of groups that include – beside the oil industry – the pharmaceutical industry.”

On February 13th 2003, exactly eleven days after the publication of Dr Rath’s first Open Letter exposing the financial interests behind the pharmaceutical ‘business with disease’ New York State Attorney General Eliot Spitzer filed a complaint in the Supreme Court of the State of New York against GlaxoSmithKline (GSK) for making fraudulent and deceptive misrepresentations that conceal the true average wholesale price of its drugs from consumers, Government agencies and drug price reporting services.