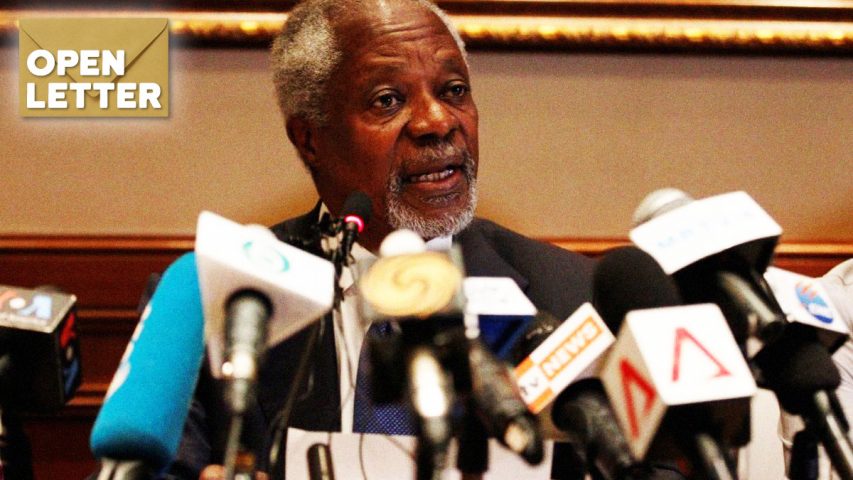 The Historic Necessity For a New World Government Now

An Open Letter Changes The Course of History

This Open Letter by Dr. Rath in the New York Times of June 30, 2004, has become one of the most important and influential public statements in the history of the United Nations. With the decision on June 8, 2004, the small elite of nations constituting the Security Council apparently thought that they could ignore the UN Charter and pretend to continue ‘business as usual.’

The adjacent Open Letter drew the attention of the world to the unacceptable fact that with this fateful decision, the UN Charter, the entire framework of international law and the basis for the UN’s very existence were irreversibly destroyed.

The fact that this Open Letter was reprinted in leading newspapers of more than twenty countries and in countless other media documents that the entire world is aware of the fact that the UN not only had destroyed its Charter but also its credibility. In the past weeks, there has hardly been any government, international corporation, organization or university that has not been contacting our foundation through the Internet for more information on alternatives.

UN Secretary General Kofi Annan grossly underestimated the impact of this Open Letter. He embarked on a whirlwind trip around the world trying to appease the outrage especially in the developing countries. At the opening of the Panafrican Parliament in August, he promised a ‘green revolution’ for Africa, and a few weeks later at the International AIDS-Conference in Bangkok, he announced pharmaceutical AIDS-drugs for all. And no one seemed to bother that Annan’s closest economic advisor at both events, Jeffrey Sachs, is also an advisor to pharmaceutical giant Novartis and the international drug cartel.

On September 15, 2004, UN Secretary General Kofi Annan, could no longer put the finger in the dam. He announced on BBC that the war against Iraq was illegal. The entire world asks Kofi Annan:

Today, you face the consequences of your silence:

The 59th General Assembly has become the funeral session of the United Nations. Once before, a world parliament – the League of Nations – had committed suicide coerced by the corporate interests behind the Nazis and in the wake of WW II.

Worse, during the opening session of this General Assembly,’ George Bush, the main perpetrator who coerced the UN’s suicide, was even invited to give a ‘funeral address.’ And you knew that he had already announced to commit more crimes by threatening illegal attack wars against Iran and any other nation or territory desired by the corporate interests he represents.

Why the UN Cannot Be ‘Reformed’ or Repaired

In the meantime, the UN Secretary General and the Members of the small elite in the Security Council are apparently aware of the damage they have done to the UN and to all mankind by robbing them of the only international body capable of protecting international peace and security. They also realized that the collective decision of June 8, 2004, has not only irreversibly destroyed the UN Charter but also the credibility of the UN in the world.

In order to cover up their collective guilt, Kofi Annan and members of the Security Council are creating a huge smoke screen of promises for ‘reforms’ and ‘changes’ within the UN. They have to come to grips that the United Nations and its Charter is dead and that any effort to ‘reform’ this dead body is as if a physician would try to resuscitate a corpse.

Germany’s Foreign Minister Fischer plays a particularly malicious role. Not only did he vote for this fateful decision that destroyed the UN Charter, but he unscrupulously abused the ensuing crisis to claim a seat for Germany as a permanent member of the Security Council. Rejected by others, Fischer twisted the arms of some threshold countries including Brazil and India to back his plan. Does he really believe that he can sell a ‘reform’ which replaces an elite club with a slightly larger elite to the world community as a reform of the UN?

The governments of Brazil and India have to decide whether they will allow to be abused as fig leaves by an elite or whether they continue to be leaders of the developing world towards a new world body based on the principle of equal rights for all countries. For more than 150 countries, any ‘reform’ of the UN is nothing but an illusion – they would be left out of any decision taking for generations to come.

Alliance of Nations – The Time to Act is Now

The governments of the world, especially the more than one hundred developing countries, now have to decide. Either they continue to allow themselves and their people to be economically and militarily abused by corporate interest groups and their political puppets within the UN, or they finally get out of their “wheelchairs” and start building a new world government with equal rights for all nations – large or small.

An international government where the paramount principal of “One Country – One Vote” has been institutionalized, is the recently founded Panafrican Parliament. Within this parliament, countries like Nigeria with a population of 130 million people have the same rights and duties as countries like Cape Verde with a population of less than half a million. Other regional parliaments will adapt the same fundamental principal of equal rights for all nations. A growing cooperation between these regional bodies in the areas of health, energy, trade, science, and others will pave the way towards development of poor nations, reduction of economic dependency and towards a global Alliance of Nations that warrants lasting international peace and security.

No one should be afraid to “get out of the wheelchair”. The scientific technology to immediately terminate any dependency from the economic powers is already available in two key areas: health and energy. On July 1, one day after the publication of the adjacent Open Letter, the New York Times had to report that vitamins are the most effective form to prevent and treat HIV/AIDS. On September 13, Newsweek had to report that hydrogen energy – energy from water – is already being used commercially to fuel cars and provide energy to households. Implementation of these key technologies in the developing countries is a decisive step to end their dependency from corporate colonialism forever.

The time to act is now!

The only way to a world of lasting peace, security and social justice is a new organization shaped by all nations
One Country — One Vote

Why was the ‘UN Charter of Economic Rights and Duties of States’ not implemented three decades ago?

On December 12, 1974, the United Nations’ General Assembly passed this important Charter with the overwhelming support of 120 member states. Excerpts of this Charter are documented below. Until now, 30 years later, none of the principles of this Charter has been implemented. They were blocked by a handful of economically powerful nations that sit in the UN Security Council and have increasingly abused the entire United Nations as a tool to impose corporate colonialism worldwide.

Without equal rights and the principle of “One country – one vote” in a world parliament, the more than 100 countries of the developing world will never achieve their right to self determination and never have a chance for real development. If the World Community does not act now and takes decisive steps towards the “Alliance of Nations”, hundreds of millions of people will continue to die from preventable diseases and other direct results of economic dependency and corporate colonialism.

Reaffirming the fundamental purposes of the United Nations, in particular the maintenance of international peace and security, the development of friendly relations among nations and the achievement of international cooperation in solving international problems in the economic and social fields,

Affirming the need for strengthening international co-operation in these fields,

Reaffirming further the need for strengthening international co-operation for development,

Declaring that it is a fundamental purpose of the present Charter to promote the establishment of the new international economic order, based on equity, sovereign equality, interdependence, common interest and co-operation among all States, irrespective of their economic and social systems,

Desirous of contributing to the creation of conditions for:

Mindful of the need to establish and maintain a just and equitable economic and social order through:

Solemnly adopts the present Charter of Economic Rights and Duties of States.

Economic as well as political and other relations among States shall be governed, inter alia, by the following principles:

(a) Sovereignty, territorial integrity and political independence of States;
(b) Sovereign equality of all States;
(c) Non-aggression;
(d) Non-intervention;
(e) Mutual and equitable benefit;
(f) Peaceful coexistence;
(g) Equal rights and self-determination of peoples;
(h) Peaceful settlement of disputes;
(i) Remedying of injustices which have been brought about by force and which deprive a nation of the natural means necessary for its normal development;
(j) Fulfillment in good faith of international obligations;
(k) Respect for human rights and fundamental freedoms;
(I) No attempt to seek hegemony and spheres of influence;
(m) Promotion of international social justice;
(n) International co-operation for development.

Every State has the sovereign and inalienable right to choose its economic system as well as its political, social and cultural systems in accordance with the will of its people, without outside interference, coercion or threat in any form whatsoever.

Every State has and shall freely exercise full permanent sovereignty, including possession, use and disposal, over all its wealth, natural resources and economic activities.

Each State has the right:

States should cooperate in facilitating more rational and equitable international economic relations and in encouraging structural changes in the context of a balanced world economy in harmony with the needs and interests of all countries, especially developing countries, and should take appropriate measures to this end.

All States have the responsibility to cooperate in the economic, social, cultural, scientific and technological fields for the promotion of economic and social progress throughout the world, especially that of the developing countries.

All States are juridical equal and, as equal members of the international community, have the right to participate fully and effectively in the international decision-making process in the solution of world economic, financial and monetary problems, inter alia, through the appropriate international organizations in accordance with their existing and evolving rules, and to share equitably in the benefits resulting there from.

The complete text of the ‘Charter of Economic Rights and Duties of Nations’ is documented here.