Vitamin Consumers Will Determine the Next US President 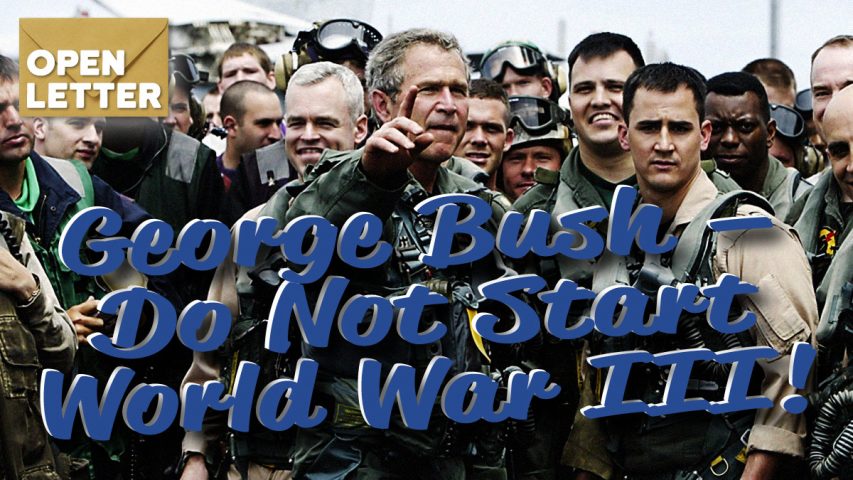 The world is on the brink of World War III. Never before in history has a war with weapons of mass destruction been so likely than in the next few weeks. The greatest threat to trigger such a war does not come from a group of terrorists hidden in the Hindu Kush mountains. It comes from the Bush administration. For the next four weeks, no one anywhere in the world has a greater interest in an escalating international crisis and a new war than the Bush administration.

The Bush administration has a problem that it cannot solve in any other way: the imminent breakdown of the multi-trillion dollar pharmaceutical industry from an avalanche of product liability lawsuits.

George Bush, you have to answer some urgent questions for the American people and the world:

The withdrawal of Merck’s Vioxx because of fatal side effects in potentially tens of thousands of patients is just the beginning. Almost all synthetic pharmaceutical drugs have life-threatening side effects, and their manufacturers will eventually have to pay hundreds of billions of dollars in damages to drug-injured patients and their families.

The class action lawsuits against the pharmaceutical industry will dwarf those brought against the tobacco industry for the harm cigarette smoking did to the health of millions of people and to the economies of entire states.

Already now, millions of patients across America have lost confidence in pharmaceutical drugs, and their doctors are asking urgent questions of the drug makers. The full scale of this imminent collapse is revealed by the following fact: According to the Journal of the American Medical Association of April 15, 1998, the known deadly side effects from pharmaceutical drugs were then already the fourth leading cause of death in America.

Thousands of future lawsuits against drug makers will unmask the financial interest groups behind the pharmaceutical investment business. It will be found that the pharmaceutical industry is no health industry, but an investment business. Its business strategy is a giant fraud scheme: While it deceptively promises health to millions of people, the return on investment of this industry depends on the continuation and expansion of diseases. Vioxx is not the exception: it is the rule.

These lawsuits will also reveal that the financial interest groups behind this drug investment business have systematically sought to discredit and even outlaw effective and safe natural health therapies for one reason only: they are not patentable, and they threaten the pharmaceutical investment business based exclusively on patented synthetic drugs.

These lawsuits will open the eyes of the people of America and the entire world to the fact that for a century, millions of people in America and billions around the world have unnecessarily died for one reason only: the financial greed of the special interest groups that the Bush administration represents.

To make things worse, the pharmaceutical industry was the largest corporate sponsor of Bush’s presidential election campaign with a clear mandate: to protect it from product liability lawsuits at all costs. Under the deceptive cover of “medical liability reform” and hidden within the “Patriot Act,” the Bush administration tried to deliver this “survival kit” to the drug business. But the people of America did not fall for this unscrupulous plan.

Now the worst nightmare has come true for the Bush administration and the special interests it represents. Left without an umbrella of protectionist laws, the drug industry that has maintained diseases among millions of people for the financial gain of a few will finally be terminated by its victims.

Only in the shadow of a tragedy surpassing the horror of 9/11 by an order of magnitude can the Bush administration hold on to power – even without elections. And its first “martial law” will be a “drug maker survival kit,” protecting the drug cartel from patient lawsuits.

Here is what you will do, George Bush:

The people of America and the world will not allow you and your administration to lead the world into a global disaster with millions of deaths.

With the exposure of your real motives through this public notice, your game is up. Even if you dare to pull the trigger, the entire world will be pointing at you.