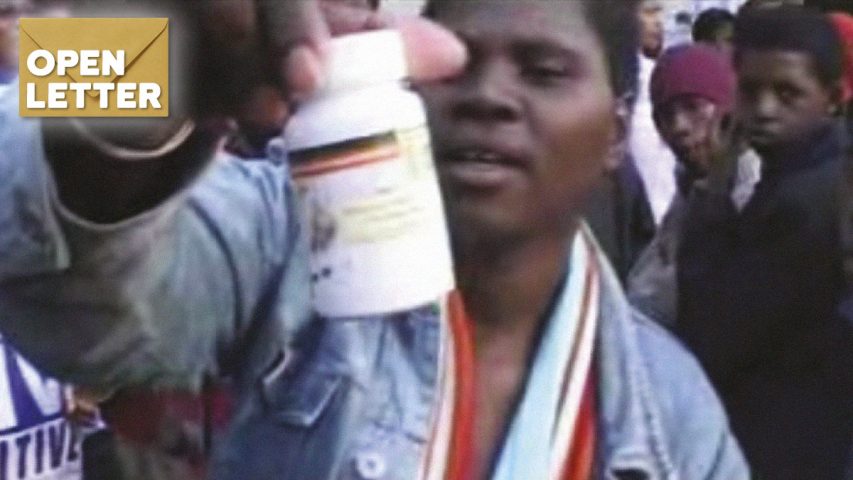 Call to the People and Governments of the World

The HIV/AIDS epidemic has become one of the greatest threats to mankind ever. The African continent is hardest hit. According to the UN, 22 million Africans have already died from AIDS and every new day takes the lives of 6000 more African men, women and children.

This human tragedy has become a multi-billion dollar market for the pharmaceutical investment business – the drug cartel – in which the return on investment is based on the continuation of the AIDS epidemic. To maintain their global market with patented AIDS drugs, the pharmaceutical drug cartel promotes so-called anti-retroviral (ARV drugs) to combat immune deficiencies. These ARV drugs severely damage all cells in the body – including white blood cells – thereby not improving but rather worsening immune deficiencies and expanding the AIDS epidemic.

In February last year, the Vatican accused the ‘pharmaceutical cartel’ of committing genocide in Africa in the name of its multi-billion dollar profits with patented AIDS drugs.

The time has come to stop these crimes against humanity and to present to the people of Africa and the world the effective, safe and affordable solution to the AIDS epidemic. Progress in natural health now offers this opportunity.

Micronutrients Can Reverse the Course
of AIDS

In Khayelitsha, a township of Cape Town, South Africa, we conducted a clinical pilot study in HIVpositive patients with advanced AIDS who had never taken any ARV drugs. The goal of the study was to show that a combination of micronutrients can reverse the course of AIDS, even in its advanced stage.

This nutrient combination consisted of specific vitamins, amino acids, minerals and polyphenol extracts from green tea. The list of micronutrients in this program and details of the study are available on this Website.

Blood tests and clinical evaluations were performed at the start and after 4 weeks on the nutrient program. Already after the first month of this study, the clinical and blood test results were profound. Patients with the most severe stages of AIDS had the highest improvements of immune function. We decided to publish the key findings without delay for the benefit of all mankind.

In support of these findings, a July 2004 the New York Times had already reported about a study in pregnant women with AIDS in Tanzania, published in the July 1 issue of the New England Journal of Medicine. This 6-year study documented that multivitamins can delay the onset of AIDs by 50%. 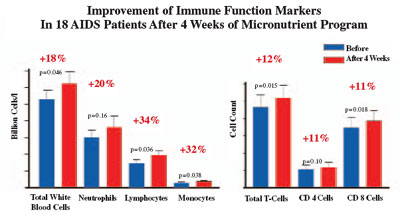 No previously tested vitamins or ARV drugs have been able to show the reversal of clinical symptoms of AIDS as documented here. Moreover, in this study all known immune system markers – not only CD4 counts – significantly improved within the short period of only 4 weeks!

Zola (20) is just one example for the clinical improvements seen in this study. Last year, when she experienced symptoms of weight loss, night sweating and coughing she consulted a clinic and was diagnosed with tuberculosis (TB) and tested HIV positive.

She was advised that after finishing her TB treatment, she should start taking antiretroviral (ARV) treatment but she objected because of the side-effects of ARV treatment. By that time she had developed symptoms of full-blown AIDS, including a deep neck ulcer that would not heal and eventually develop a severe infection (see picture A below). She also had pain in her legs and other parts of her body.

Soon after she started the nutrient program, the pains in her body stopped and she gained weight. The infected wound began to heal and after one month had almost completely disappeared (see picture B below).

Through the AIDS epidemic the drug cartel has turned South Africa and the African continent into a battleground to force its multi-billion dollar drug business upon the entire developing world. The people and the government of South Africa have taken on this fight by basing its health care system on effective and affordable natural health solutions. The scientific foundation for this health approach is documented in every textbook of biology and biochemistry: vitamins and other micronutrients are essential cofactors for optimum metabolism of millions of cells in our body – including the cells responsible for effective immune defense.

By doing so the South African government is tearing down the artificial wall built in the interest of the drug cartel between biological science and pharma-oriented medicine. Withholding life-saving information about effective natural health and keeping the people of the world ‘health illiterate’ has been the basis for the multibillion dollar global investment business with patented synthetic drugs. In this war between natural health and the ‘business with disease’ of the drug cartel there can be only one winner. The control of the AIDS epidemic through natural means, which is now in sight, will inevitably terminate the unscrupulous multi-billion dollar drug business with the AIDS epidemic. In this battle for its survival the drug cartel and its political stakeholders are currently mounting their ‘last offensive’ on Africa.

The control of the HIV/AIDS epidemic through vitamins and other micronutrients inevitably terminates the multi-billion dollar business with patented AIDS drugs. The natural control of the AIDS epidemic destroys not only the marketplace for the drug industry but its entire credibility. The drug cartel is being unmasked as an organization preventing natural, non-patentable health solutions in order to protect their global markets with dangerous, patented drugs and sacrificing the lives of people in genocidal proportions. The people and the government of South Africa are leading the global struggle for the liberation of human health from the drug cartel.