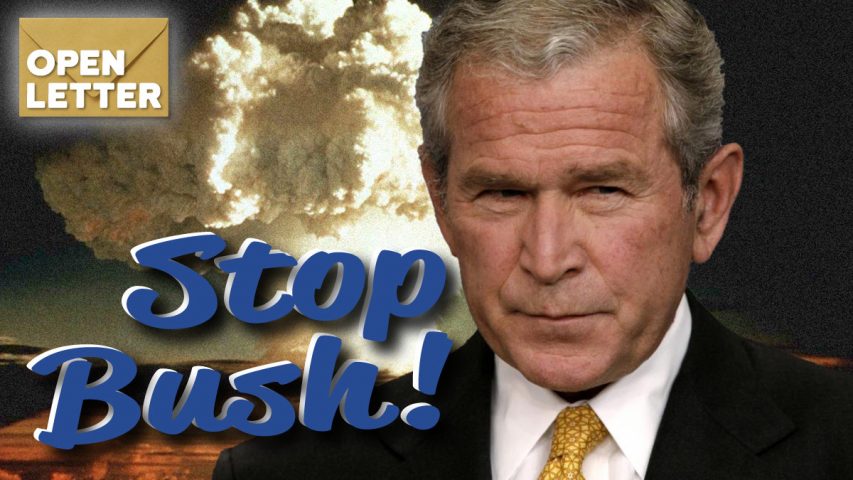 The world is closer to WWIII than ever. Until today no one has provided a convincing answer as to “why?” The purpose of this Open Letter is:

The recent war in the Middle East was nothing else than a substitute war designed and controlled by the Bush Administration. Its deliberate brutality was intended to escalate this war into an open military conflict between Iran and the U.S. thus beginning WWIII. But this plan failed. As this war dragged on and casualties rose, world opinion eventually terminated it. Now is the time to answer urgent questions.

Why Does the Bush Administration Seek to Launch World War III?

Parallel to the global military escalation, the Bush Administration has domestically made every preparation to turn U.S. democracy into a dictatorship. Again under the pretext of fighting terrorism a series of empowerment laws have been passed, including the Patriot Act, the Homeland Security Act, the Biodefense Act and others.

The common denominators of these acts are:

The only step needed to activate this entire set of empowerment legislation is a world war with the ensuing martial laws.

The outrageous step of preparing WWIII cannot be explained by the desire to gain access to oil fields. Only the foreseeable economic loss of catastrophic proportion can trigger such a desperate action. This is the imminent collapse of one of the largest investment industries: the multi-trillion dollar pharmaceutical drug business with disease.

The scandals from the deadly side-effects of Vioxx, Baycol and other widely used drugs are already threatening the economic basis of the largest drug makers in the world. Now the survival of the entire pharmaceutical industry is at stake. Constructed as an investment business based on patented drugs, this industry has been unmasked as a giant organized fraud: it promises “health” but its entire existence depends on the continuation and expansion of diseases as multi-billion dollar drug markets.

To protect its business with patentable drugs from competition by effective, non-patentable therapies, the stakeholders of the pharmaceutical business have consistently excluded research with non-patentable natural substances. Moreover, they have strategically barred basic knowledge of biological science in this field from entering the medical practice to fight global diseases including heart disease, cancer and immune deficiencies. If this basic knowledge had been implemented into medicine when it became available decades ago, neither the scope of most diseases nor the size of the drug investment business would have reached today’s magnitude.

Now that the deceptive strategy of this “business with disease” has been unmasked, its entire credibility is at stake and with it the survival of multi-trillion dollar markets of patented drugs. The desperate effort to prevent the largest financial collapse in history is the driving force behind the plans for WWIII.

The next months will see the Bush Administration threatening military action and wars against Iran, North Korea and other countries. However, with the publication of this information the launch of WWIII will no longer be possible because: