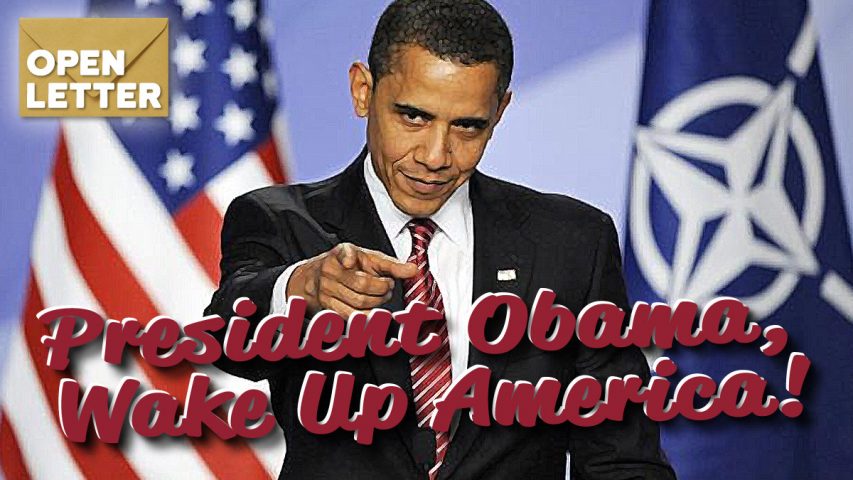 They’ve Done It Before – They Try It Again Today!

The goal of the special corporate interests – namely the Oil and Drug Cartel – in the US today is to transform democratic society into a corporate dictatorship, thus enabling multi-trillion dollar corporate interests to exert direct control over the political executive and the country.

Towards this end they are instigating the radicalization of society and financing the election campaigns of their political stakeholders. This strategy is an exact copy of the Oil and Drug Cartel’s takeover of Germany in 1933 – a strategy executed with the help of the Cartel’s political and military stakeholders, the Nazis.

America at the Crossroads

Over the past two years, the social and political life in America has been radicalized and polarized in an unprecedented way. What appears as a’grass-root’ movement articulating anger towards the current government is, in fact, a strategically implemented campaign by special interests, namely the Oil and Drug Cartel, to regain control over the White House and the country.

Worse, fighting a battle for survival of its outdated technologies, these special interests can no longer survive in a democracy and must seek dictatorial powers. In this historic situation, the only way to protect democracy is to expose the historic record of the Cartel.

In Open Letters on July 16 and September 13, 2010, I have exposed in this newspaper the historical parallels between the political escalation in Germany in the 1930’s and that of the US today. Then and now, the Cartel financed the political destabilization of democracy, with the goal of replacing it with a corporate dictatorship.

In Germany, then, the Cartel succeeded in seizing power and launching WWII because people and politicians around the world ignored the early warning signs. In the USA, today, the Cartel has launched an all-out psychological war. Organizations like the ‘Tea Party’ are radicalizing society. The only way to derail their plan of destroying democracy is to expose the criminal history and the motives of these special interests.

Global Dimension of this Threat

New technologies in the area of energy and health threaten the multi-trillion dollar global monopolies of the Oil and Drug Cartel. The Cartel’s giant markets of outdated technologies are no longer compatible with democracy and can only be maintained in a glo­bal dictatorship of corporate interests.

A first step in the direction of establishing such a global corporate dictatorship has already been taken. The recently founded so-called ‘European Union’ in Brussels (the ‘Brussels EU’) is not a democratically elected or legitimized body. The so-called ‘EU-Commission’ – 27 technocrats appointed by Cartel interests – preside over the lives and fates of 500 million people across Europe by means of dictatorial ‘directives’ and ‘regulations’.

Largely unbeknown to the rest of the world, the so-called ‘European Parliament’ has no independent right of legal initiative and serves merely as a fig-leaf for this ‘Cartel Commission’.

Even more appalling is the fact that the entire ‘Brussels EU’ structure is the implementation of plans conceived before and during WWII by the Oil and Drug Cartel and their Nazi stakeholders. The goal then and now was to cement their economic rule by means of a ‘Central Cartel Office’ that determines essentially every aspect of life in Europe and, eventually, the rest of the world.

The historical facts and documents are available online at www.Nazi-Roots-Of-Brussels-EU.org.

The Strategic Role of the USA

The key country in the Cartel’s ‘survival strategy’ is the USA. Not only is the US the home base of most Oil and Drug corporations, it is also the strongest military power to defend these special interests.

A major setback for the Cartel was the fact that in 2008 the American people elected a President on a platform of ending the ‘tyranny of oil’ and of reforming health care, including a focus on prevention.

In order to reverse this vote, the Cartel must not only regain control of the US government but must try to fundamentally ‘reprogram’ the American people by financing the dissemination of doubt and deception. Towards this end, the Cartel has been mobilizing an army of stakeholders in the media and politics.

The blueprint for this strategy of radicalizing society in preparation for war was pre-WWII Germany. The unobstructed implementation of this strategy in 1933 led to the overthrow of democracy, the installation of a dictatorship on behalf of the Oil and Drug Cartel and, eventually, to a military attempt to expand its global markets during WWII.

The records of the Nuremberg War Crimes Tribunal and of the US Congress unequivocally document that WWII was launched in the interest – and with the financial as well as technical support – of the German-based Oil and Drug Cartel (Bayer, BASF, Hoechst). Its goal was to seize control of the multi-trillion dollar global markets of oil, patented chemicals and drugs.

The psychological preparation of German society for this military conquest was the launch of a ‘racial war’ against Jewish and other non-Aryan people and the elimination of any political opposition. The key vehicle to execute this plan was the Nazi/Cartel-financed ‘grassroots’ movement – the ‘brownshirts’.

The systematic instigation of hatred, aggression, racism and other forms of psychological terror by the ‘brownshirts’ in pre-war Germany was the pre­condition for the next stage: the mass murder across the globe by the SS and German Wehrmacht in the Cartel’s attempt to control the world.

After WWII, the German Oil and Drug Cartel was dismantled and its shares transferred to US- and UK-based multinational oil and drug corporations. The Cartel’s criminal past was deliberately hidden from the public for one main reason: not to endanger its future attempts at world control. 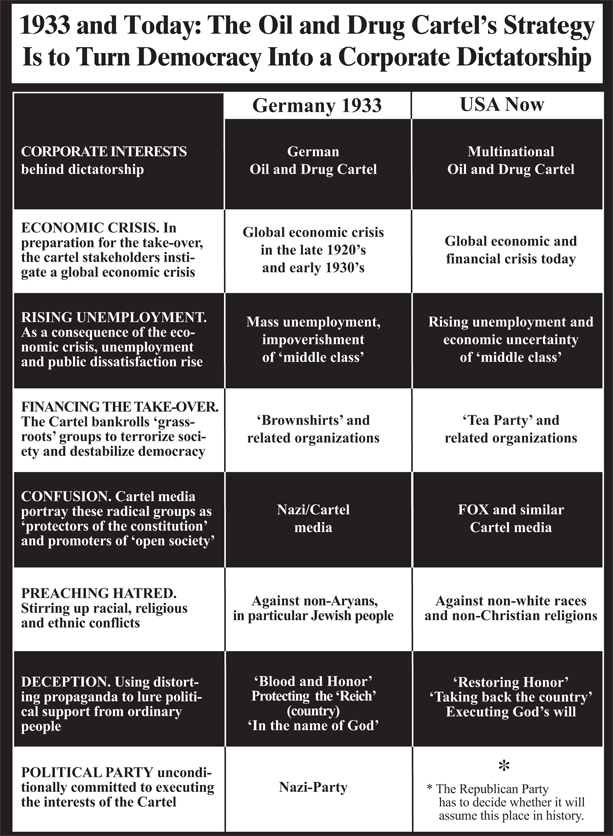 President Obama, you have the responsibility to disseminate this historic parallel to the American people in order to enable them to actively defend freedom and democracy.

The Goals of this Publication