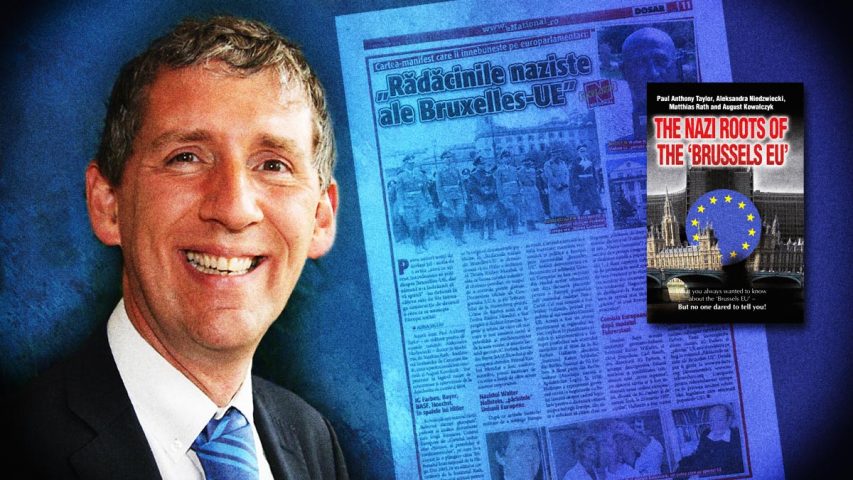 Four authors united by the same goal – to show “what you always wanted to know about the Brussels EU but nobody dared to tell you” – have exploded in a few hundred pages the construction, built over decades, of what is called “The United Europe”

The authors are: Paul Anthony Taylor – a fighter for natural food, Aleksandra Niedzwiecki – a doctor of biochemistry, Dr. Matthias Rath – founder of the Dr. Rath Research Institute, a center for natural medicine and August Kowalczyk – a former prisoner in the Nazi concentration and extermination camp of Auschwitz, with the number 6804.

Kowalczyk is the author of the “Barbed Wire Refrain” book and has many documents relating the formation of the EU to the “industrial Cartel of chemicals, oil and drugs”, which he has attached to a complaint filed at the International Court in the Hague.

Since 2003, the researchers from the Rath Institute have joined him and started actions to unmask the “elite who want to control the whole world”, encouraging the European politicians, especially those working in Brussels, to study the originals of the published documents.

The “Nazi Roots of the Brussels EU” demonstrates that it was not Hitler who started World War II but the elite of an industrial cartel of chemicals, oil and drugs, with the purpose of controlling global markets.

Official documents of the US Congress and of the Nuremberg War Crimes Tribunals show that World War II was prepared and facilitated – from a financial, logistical and technical standpoint – by the biggest and best known oil and drugs cartel of that time, the German IG Farben cartel that consisted of Bayer, BASF, Hoechst and other chemical companies.

World War I was, according to the authors, the first attempt at world conquest by these corporate interests.

The Nazi Walter Hallstein, “father” of the European Union

After both military attempts to subjugate Europe had failed, the Cartel invested in a third attempt: the economic and political conquest of Europe by means of the “Brussels EU”. The authors prove with documents that the architects of the European Union were recruited from among those technocrats that had already planned a post-war Europe under the Nazi/Cartel coalition. The most well-known was Walter Hallstein, the first president of the so-called EU commission. He was a prominent lawyer in the Nazi regime, involved in the legal and administrative planning of post-war Europe under the control of the Nazis and the IG Farben elite. Hallstein had graduated from the “Kaizer Wilhelm Institute” in Berlin, financed by IG Farben. He had been a member of the Rechswahrer (Nazi Association of Law Protectors). In 1938, Hallstein represented the Nazi government in negotiations with fascist Italy concerning the legislative framework for an extended dictatorship throughout Europe, from which only one quote is enough: “The legal order of the dictatorial state (Fuhrerstaat or the Greater Germany) has the task to protect the integrity, the health and the racial health of its people (…) The supreme race has to be particularly protected from the Jewish race by eliminating it from society for all time”.  The negotiations took place in Rome where he was to return later as “father” of a “democratic” Europe.

The European Commission, according to the Fuhrerstaat model

Immediately after this German-Italian conference, the Kaizer Wilhelm Institute, whose president, Carl Bosch, was an IG Farben director, announced the discovery of nuclear fission and the possibility of building a “supreme weapon” that would help in installing the new European order desired by IG Farben and the Nazis. On March 25, 1957, already “cleaned”, Hallstein was named one of the 12 founding fathers of the “Treaty of Rome”, the foundation of the EU,  and in 1958 he was named president of the EU Commission, decreeing: “The European Commission has full and unlimited powers for all decisions related to the architecture of this European community”. In a Nazi propaganda speech given in 1939, Hallstein was proclaiming the same things but with different words: “The creation of the New Law [of the Nazis] is ONLY the task of the law-makers!”. True democracy! From the position he was assigned, Hallstein shaped the EU structure according to the initial plans of a post-war Nazi Europe under the yoke of IG Farben. All the interconnections between the Nazis, IG Farben and the EU “fathers” are described in detail in the book “The Nazi Roots of the Brussels EU”.