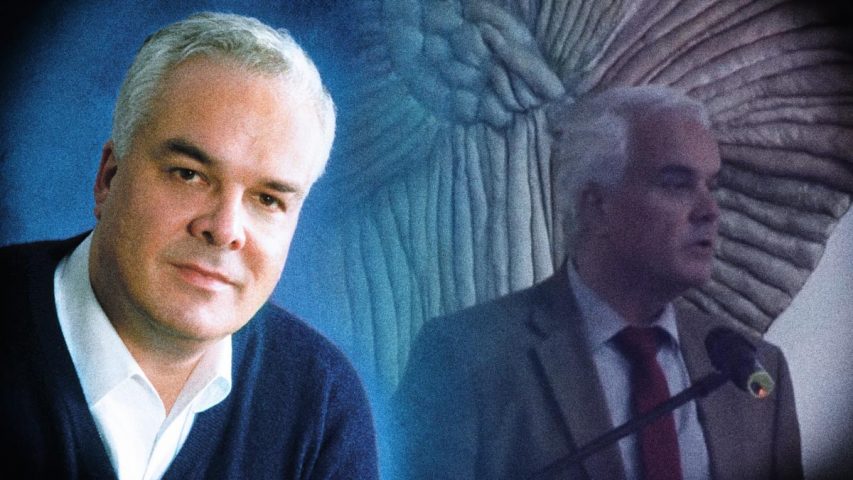 This speech, entitled “Movement of Life – Foundation of a New World” was given by Dr. Matthias Rath on 24 May 2014 at a conference held in Auschwitz, Poland. Dedicated to August Kowalczyk, a former prisoner of the Auschwitz concentration camp, it describes how the only way to ensure the survival of mankind is to publicly unmask the plans of the Pharmaceutical, Chemical and Petrochemical Cartel and enable the people of the world to look behind its curtain of deception.

Dear Survivors of the Auschwitz Concentration Camp, dear Guardians of Memory, dear friends of the Movement of Life.

The title of my talk is ‘Movement of Life – Foundation of a New World’.

I am dedicating this talk to August Kowalczyk, the prisoner of the Auschwitz concentration camp who brought us together many years ago. August has passed away since, but we all know that he is here with us today.

Auschwitz is a holy place on this planet.

It is holy for the millions of people who lost their lives here.
It is holy because you, the survivors of the mass murder committed here and we, representative of the next generations, are united in one common goal: Never again!
Auschwitz is holy too, because it is right here that this and all future generations of mankind will find the decisive answers to the question of “Why”:

The answer to this questions affects the life of us today and all future generations — and this decisive answer lies here in Auschwitz.
Auschwitz was not only the site of the most infamous Nazi concentration camp. The same city was also the site of the largest industrial plant of World War II Europe, IG Auschwitz, a 100% subsidiary of IG Farben, the infamous Cartel formed by the German chemical and pharmaceutical multinationals BAYER, BASF and HOECHST. The fact that the concentration camp and the 24 square kilometer big chemical plant were located only a few miles apart was no coincidence.

It was the giant demand of slave labor for this chemical plant that turned the small concentration camp Auschwitz into a mass extermination camp. Once equipped with the death machinery to dispose of worn-out slave laborers, the KZ became an extermination site for the mass murder of Jewish people, but also of Slavic and other non-Arian people — as well as prisoners of wars from Poland, the Soviet Union and many other European nations.

The post-World War II Nuremberg Tribunal against the IG Farben Cartel revealed that these corporations were not only responsible for turning Auschwitz into a mass extermination camp. The court records also established that without the financial, technological and logistical support of the German Chemical Industry, World War II would never have taken place.  In fact, this industry commissioned this terrible war with the goal to dominate the economic markets that would determine the ‘rulers of the world’ for decades to come: the markets of patented chemical and pharmaceutical products.

In fact, only if we understand the fact that world wars are primarily driven by economic interests, only if we accept the fact that there are corporate interests so large that they are willing to sacrifice millions of lives to conquer and to defend them — only then will be able to prevent future wars.

Thus, I am stating here today: the clue to the survival of mankind lies right here in Auschwitz, the place on earth where the death of millions in the KZ Auschwitz is eternally linked to the IG Auschwitz, the embodiment of corporate interests putting profits over lives.

After the end of World War II, the heirs of the IG Farben Cartel spent billions to destroy the evidence and to keep their criminal record out of the history books — for one reason only: so the very same corporate interests could launch yet another attempt at world conquest. Not surprisingly, the official records of the Nuremberg War Crimes Tribunal against IG Farben where hidden away from the eyes of three generations in remote archives — for more than 7 decades.

In summer of 2007 our Foundation decided to end this cover-up of the chemical Cartel’s criminal history and publish more than 40,000 pages of official records from this Tribunal online — for everyone to see — anywhere in the world. The cover-up of the economic roots of WWII and the crimes against humanity committed in the interest of corporate greed was over.

A few months later, in November of 2007 our Foundation received the “Relay of Life” award from you, the survivors of the KZ Auschwitz and other Nazi concentration camps right here. Because of the moral and ethical weight you, the survivors, carry this is one of the most prestigious awards any organization can get. After the award ceremony that day, August Kowalczyk asked us “What are you going to do with this award?” I responded that one day there will be a “Movement of Life” that will take the historic lessons from Auschwitz to build a better world. This movement will, above all, be carried by young people for whom this knowledge is motivation and guidance at the same time.

Today, we met here in Auschwitz and present to you, the survivors of the KZ Auschwitz, the first steps this ‘Movement of Life’ has undertaken on its journey. It is a beginning, but we pledge to you that we will not give up, until we have reached our goals — to secure as fundamental human rights for all people the right to life, to free access of health, to healthy food free of genetic-alterations, to clean water, to renewable energy and to comprehensive, independent education.

And we promise you to come back every year to give account to you about our progress. And each year we will be joined by more young people and allow them the privilege of meeting you and expressing their commitment.

As for my part, the reason why I am standing here today is the fact that during my life time as a scientist I was privileged to make contributions to the field of science and medicine that promise to significantly reduce – if not eliminate – today’s most common diseases, including cardiovascular diseases and cancer.

These scientific breakthroughs that could save millions of lives were not welcomed by the status quo. Over the past decades, the pharmaceutical lobbyists in medicine, media and politics have launched more than 100 lawsuits against our research with one goal only: To sabotage these breakthroughs in order to prevent their multi-trillion dollar/Euro business with patented drugs — that is dependent on the continuation of wide spread diseases as markets.

The same corporate interest groups, the chemical and pharmaceutical industry, that had been responsible for the crimes against humanity committed in Auschwitz decades ago, are the same interests that are again risking the lives of millions of people by preventing them from receiving life-saving information about the scientifically proven health benefits of natural health approaches.

One evening during our 10 year relationship I asked August Kowalczyk over dinner: “August, what is the bond between your life and mine”. His answer was short: “IG Farben.” And he added: “But your battle today is more difficult than ours then.” I was shocked. Here was a man who escaped the concentration camp Auschwitz were millions of people had been murdered, describing our task today as more difficult than yours during World War II. I asked him: “What makes you say that?” He answered: “We could see our opponents — but you can’t, because they hide.”

I will never forget this conversation. And it is precisely for that reason that an important goal of the “Movement of Life” is to expose those corporate interests that continue to sacrifice the life of millions of people for corporate greed.

The “Movement of Life” is the only alternative if we don’t want to allow the Cartel take over our planet and enslave it for generations to come. Developing superior alternatives to chemical drugs, fossil energy and other outdated technological monopolies of the Cartel, breaking the silence and spreading this information across our planet will liberate this planet from the yoke of the Cartel.

And the Cartel stakeholders know that time is running out on them. In the field of health care if they allow the breakthroughs in natural health and Cellular Medicine replace their synthetic drugs, the Cartel loses long term revenues in the magnitude of hundreds of trillions of dollars or Euros. The same is true if they let alternative energy replace their monopoly on fossil and nuclear energy.

From a historical analysis, the cartel today is defending nothing less than its right to exist and rule the world.

Only if we have worked ourselves through to this analysis will we be able to realize the dimension of deceit and outright lies we are currently faced with:

The only answer to this precarious situation is to unmask these plans and make the people of the world look behind the Cartel’s curtain of deception. Because it is only if we reveal their plans and publicize them before they can act that we can prevent yet another major war. That is the goal of my speech today — and precisely that is the goal of the ‘Movement of Life’.

Thus, in its very core the ‘Movement of Life’ is a peace movement. For if mankind is unable to preserve world peace in the Nuclear Age, everything else becomes irrelevant.

If we have any doubts about the transitional times we live in today, we only need to go back in history 400 years, when the Feudal rulers of Europe wanted to preserve their Medieval privileges by launching the infamous “30 Year War” that destroyed and depopulated one third of the European continent. To no avail, because nothing could prevent the advent of Modern Times once the people had set their minds to making the advances in science, commerce, culture a reality — and, above all, the political shift from autocracy to democracy.

The parallels o today are breathtaking. Today, we too, live in a time that mark the last stage of an old regime that — similar to feudal dictators — tries to rule this planet by means of a corporate dictatorship.

The key weapon we have in this largest liberation movement of all time is not military in nature — it is education of ourselves and our fellow citizens.

The first educational measure to win this battle and to guide mankind — peacefully — through this precarious transition in history is to spread the message about the weakness of the Cartel — and about our strength. That is the purpose of the “Movement of Life”.

Then and now the rewards for mankind to liberate itself from an outdated economic rule is breathtaking.

The world around us has dramatically changed by then.

And when we will look back in the year 2030 and reflect on the two decades that had passed, we will notice that over all these years of historic change, when mankind decided to turn away from the abyss of eternal corporate dictatorship and embrace a future of dignity, true democracy and lasting peace — one organization had been the driving force: Our “Movement of Life”.

The only obstacles that stand between us today and that moment in the future are the confines of our own minds and the hesitations of our hearts.

But together we will accomplish this audacious goal! Therefore, from the city of Auschwitz, today, we call on the youth of the world to join us in building the largest liberation movement of all time, the “Movement of Life”!