CIA Torture Report: Time for Bush and Cheney to be held accountable for their crimes 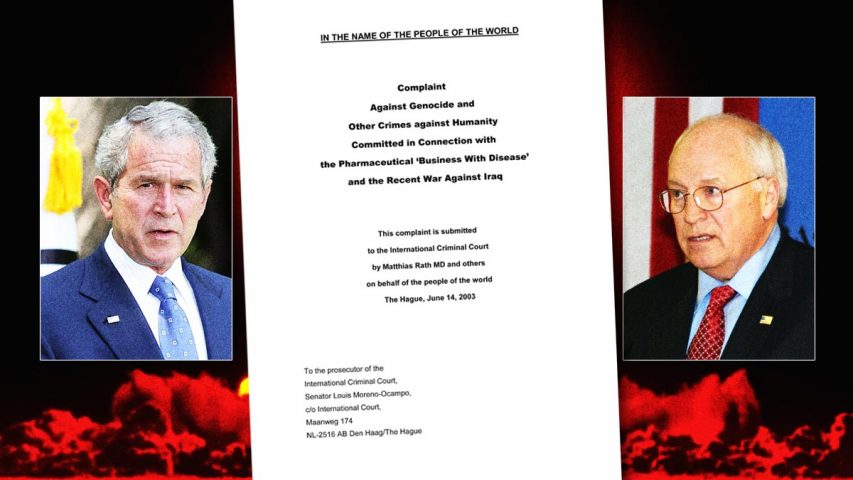 George W. Bush (left) and Dick Cheney (right) were among the accused in the complaint that was submitted by Matthias Rath, MD to the International Criminal Court in The Hague.

With even United Nations officials now openly demanding prosecutions, the US Senate Intelligence Committee’s shocking report on the CIA torture program clearly shows that the Complaint submitted to the International Criminal Court (ICC) in 2003 by Matthias Rath MD and others was an important step towards bringing the perpetrators to justice. Accusing George W. Bush, Dick Cheney, Donald Rumsfeld, Condoleezza Rice and others with causing injury, death, torture and other inhumane acts, war crimes and crimes against humanity, the Complaint was submitted to the ICC’s then prosecutor, Luis Moreno-Ocampo, with the request that it should be considered with the utmost urgency. Eleven years on, with the validity of these accusations having been demonstrated in graphic detail to the entire world, we believe the time has come for the accused to finally be held accountable for their crimes.

The aim of our 2003 Complaint was to bring before the ICC what are arguably some of the gravest crimes committed in human history. In this respect, whilst we note that over 6000 pages of the Senate report are still being withheld, the public release of the current 525 pages is highly significant. Ultimately, any legal action that results from their disclosure should be expanded to include not only those crimes carried out in relation to the so-called “War on Terror”, but also those related to the pharmaceutical “Business with Disease.” These two fields of crime are directly connected with each other because in both cases their key goal is to benefit the interests of the same corporate investment groups and political stakeholders.

The Bush administration officials named in our 2003 Complaint have always known they would one day be held accountable for their crimes. Because of this they have sought to undermine the authority of the ICC as a means of putting themselves above international law. Significantly therefore, Zeid Raad al-Hussein, the UN High Commissioner for Human Rights, has already gone on record as saying it is “crystal clear” under international law that the United States, which ratified the UN Convention Against Torture in 1994, has a legal obligation to ensure accountability.

UN Special Rapporteur on Counterterrorism and Human Rights Ben Emmerson has gone even further and publicly proposed that not only should CIA and other government agents responsible for committing torture be prosecuted, so also should the senior officials from the Bush administration who planned and sanctioned it. Aware that the CIA’s torture program was fully authorized by senior leaders at the White House, the US National Security Council and the US Department of Justice, Emmerson has specifically stated that the US is legally obliged to bring those responsible to justice.

Whilst we would like to hope the UN could be a willing and active partner in ensuring that justice is served, its recent history is not encouraging. By authorizing the US-led military occupation of Iraq in June 2004, the UN Security Council essentially destroyed its own code of international law, the UN Charter, and thereby the very basis for the UN’s existence. As a result, every nation of the world, and especially developing nations, became prey to global corporate interests and at risk of being threatened, attacked and conquered, under any pretense, by any stronger economic power. The geopolitical history of the past ten years clearly illustrates the damage this has inflicted.

The need for the Bush administration officials named in our 2003 Complaint to be held accountable for their crimes becomes ever more urgent with each passing day. For, unless this happens, multinational corporate investment groups and their political stakeholders will continue to remain above the law and hold the people of the world to ransom. It is therefore our hope that the release of the US Senate report on CIA torture can become the start of a process leading to the eventual conviction and detention of the individuals named in our 2003 Complaint and, as a result, that a world of health, peace and social justice will emerge.