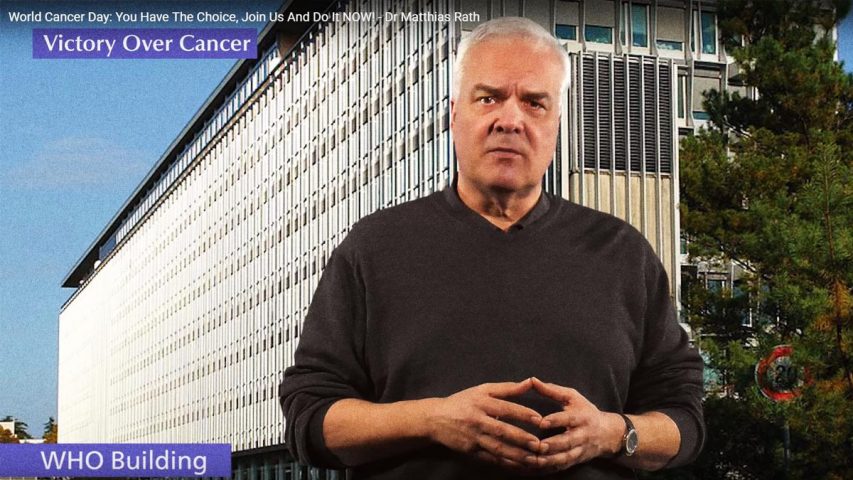 The World Health Organization – the WHO – has proclaimed February 4 as world cancer day in order to promote worldwide awareness for one of the big unresolved problems of mankind – the epidemic of cancer. While every effort to create worldwide awareness about the need to end this epidemic should be applauded, there are serious doubts that the World Health Organization is able to help accomplish this goal. Why? Today, almost one third of the money financing the WHO’s operations comes from multinational pharmaceutical companies. As ‘return’ for this ‘investment’ into the WHO, the drug industry expects a huge ‘return on their investments’ from this world body. Thus, the WHO is no longer independent but its programs and activities – including ‘world cancer day’ – essentially turn into marketing campaigns for patented chemical drugs.
Read the full transcript of Dr. Rath's message

The pharmaceutical industry has no interest whatsoever to end cancer. For this industry, the cancer epidemic is a multi-billion market for its patented chemotherapy drugs. Ending cancer would lead to a meltdown of these lucrative global drug markets. In turn, the continuation of the cancer epidemic is the precondition for the continuation and future existence of the pharmaceutical investment business.

For the drug companies the World Health Organization is a perfect veil to mask its unscrupulous “business with disease”. Allowing these interests to influence and steer the decisions of the WHO, is like inviting a virus to enter a healthy cell and reprogram it or – to use another picture – like inviting the Mafia to run the police headquarters.

My name is Dr. Matthias Rath and there is a good reason why I am talking to you today so distinctly. For a quarter of a century now, I have been a first-hand witness to the devastating role of the pharmaceutical industry as well as the drug-money influenced WHO and its destructive effect on the health of the people of the world.

More than two decades ago, I was privileged to make breakthrough scientific discoveries that will eventually lead to the natural control of cancer as an epidemic. Cancer cells use the same mechanism that some healthy cells use to migrate through the human body – the local digestion of connective tissue. In the case of cancer cells, this mechanism goes awry and the connective tissue digestion runs uncontrolled, leading to metastasis and death.

Moreover, we could prove that certain natural substances, namely micronutrients, are able to block this uncontrolled spread of cancer cells – while leaving heathy cells unharmed.

I published this groundbreaking discovery in 1992 together with two-time Nobel Laureate Linus Pauling. This discovery instantly threatened the global pharmaceutical market of patented cancer drugs. Not surprisingly, the proponents of chemotherapy decided to ignore and silence this knowledge – thereby risking the lives of millions of cancer patients who have since died from cancer. But we did not give up.

In 1999 we started our own research institute with natural cancer control as the first target of our investigations. By 2002, our scientists had confirmed these discoveries. We decided to announce this major medical breakthrough to the world. On March 8, that year, the world’s largest newspaper, USA Today, published a full-page announcement ‘Breakthrough in Cancer Research’. It read: ‘Our research proves that vitamin C, lysine, proline and specific extracts from green tea can inhibit the spread of cancer cells.’

With this announcement, we had apparently dug out the war axe against the chemotherapy lobby and their stakeholders in medicine, politics and the media. With more than 100 lawsuits against me and my colleagues, the drug lobbyists tried to stop this message from reaching the corners of the world. To no avail.

Today thousands of patients around the world are using this breakthrough already with encouraging results. Some of them even experience a complete remission of their tumors – like this lung cancer patient.

By now the information that cancer is no longer a death verdict has spread around the world. You may have seen Ty Bollinger’s recent online documentation “The truth about cancer” or visited some of the ‘YouTube’ lectures by my colleague, Dr. Niedzwiecki or myself.

If you want to know more about this scientific breakthrough in natural health that may lead to the control of the cancer epidemic, you can read the popular science summary of our research online for free.

My message for the upcoming ‘world cancer day’ is clear: If you follow the World Health Organization and its corporate sponsors, cancer will continue to spread in epidemic proportions. Despite all your good intentions, you may one day wake up and feel abused by the ‘peter pipers’ of the pharmaceutical drug lobby and a corrupted WHO. If your goal is to help prevent cancers by science-based natural means – and one-day even end the cancer epidemic – I encourage you to inform yourself about our research and our decade-long battle for human health. Contact us to see how we can work together – people, health professionals, activists – all committed to end cancer and united in the promise not to end until we reached this goal.

World cancer day 2016 is not a one-day ‘dog-and-pony show’ for us. Contact us to see how we can work together – people, health professionals, activists – all committed to ending cancer and united in the promise not to stop until we reach this goal.

World Cancer Day 2016 reminds us of the growing scope of this disease and the fact that it does not discriminate between young and old, famous or unknown, rich or poor. Despite the actions of multiple anti-cancer organizations, foundations and campaigns with the goal to raise more money for cancer research, progress has been either mediocre or non-existent. However, as long as we do not fully realize that cancer, like other diseases we suffer from, is being maintained as a market for the enormous profits of the pharmaceutical business, real change will not take place.
Read the full transcript of Dr. Niedzwiecki's message

A vast majority of the funds that are raised in cancer campaigns go to support the same research groups, facilitate the old dogmas, and continue the same research directions. And although they can generate more patents and journal publications, the real cure is not even in sight. The old therapeutic approaches still continue to cause mass destruction of the body with chemicals or radiation. Similarly, new attempts to apply different ‘drug drones’ to find and kill individual cancer targets do not bring expected results. This is the time to demand changes!

Therefore, World Cancer Day is also an opportunity for all of us to reach out to others to talk, educate and explain the innovative approach to cancer that was discovered by Dr. Rath. The confirmation of this approach in numerous studies from our scientific institute forms the new direction in cancer research we have all been waiting for. This direction highlights new, critical targets in controlling cancer and offers effective natural solutions. We must – and will – continue with this vital work.

Among us are many people who have already benefited from this research – you may even be one of them. Many people have conquered this aggressive disease, gained a longer and better quality of life, or delayed the progress or manifestation of cancer. Quite often though they are too shy to talk about it.

Our scientific work was made possible because of your activity and involvement, and we are counting on your continued future support. If innovative research directions such as ours can continue, and if overcoming the profit motive as a decisive factor becomes a reality when choosing effective treatment options, we will conquer cancer!

February 4th is YOUR Day! Talk to others about the new way to fight cancer, and share our books and research information. Talk about the ways to prevent cancer through healthy food choices, micronutrient supplementation, support for organic agriculture, and public control of chemicals in our food, water and environment. We cannot count on others for fighting cancer – it has to start from ourselves!

The 8 million deaths that occur globally every year from cancer are one of the greatest health tragedies of our time. As a result of the constant barrage of pro-pharma propaganda produced by the mass media, and the fact that medical schools provide doctors with virtually no proper training in nutrition, cancer patients have been led to believe that submitting themselves to intravenous infusions of toxic chemotherapy is the only possible route to regaining their health. However, almost nothing could be further from the truth.
Read the full transcript of Mr Taylor's message

One of the most brutal forms of medical treatment ever invented, chemotherapy drugs result not only in serious side-effects but also a risk of new cancers and additional diseases. It is easy to see why, once trapped in the vicious circle of orthodox cancer treatment, patients can often lose all hope.

Ultimately, the only beneficiary from this desperate situation is the trillion-dollar-a-year pharmaceutical industry, for whom cancer drugs are now its highest-earning therapy area. Sales of drugs for cancer now exceed 74 billion dollars a year, with income from painkillers and other drugs contributing still further to the money that pharma companies make from the continued existence of this disease.

But it doesn’t have to be like this. Based on the scientific discoveries of Dr. Matthias Rath and the cutting-edge work carried out at the Dr. Rath Research Institute under the direction of Dr. Aleksandra Niedzwiecki, we now know there are safe and effective natural approaches to cancer that can block all key mechanisms that make it a deadly disease. Releasing patients from the deadlocks of conventional medicine, these new science-based therapies take advantage of the principles of Cellular Medicine and the knowledge that the primary cause of today’s most common diseases is a chronic deficiency of vitamins, amino acids and other specific micronutrients. The sooner the people of the world can be informed about these life-saving natural treatments, the sooner that poisoning patients with toxic chemotherapy can become a thing of the past.