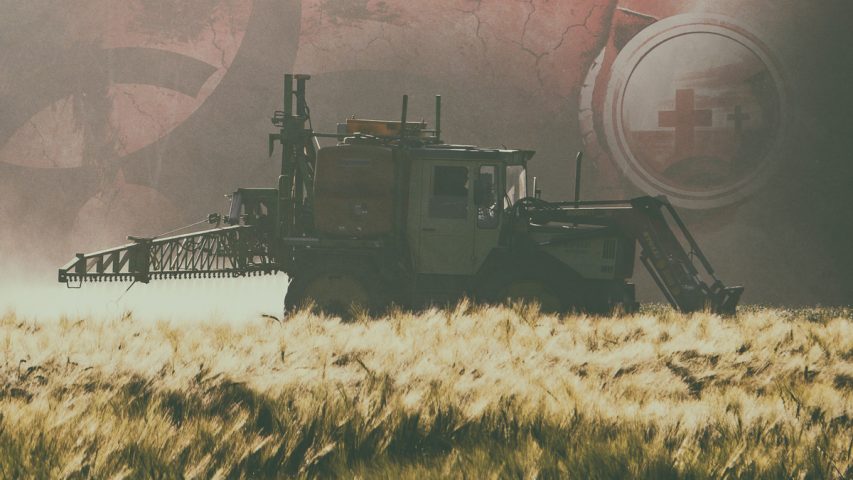 Roundup is a highly toxic herbicide containing the active ingredient glyphosate. Glyphosate is a non-selective herbicide, which means that it kills plants by preventing them from making certain proteins required for their growth. Monsanto, now owned by Bayer, produces Roundup and seeds that grow into genetically engineered (GE) plants that are tolerant to glyphosate. Worldwide Roundup sales are projected to be $9 billion in 2019 due to the demand created by Monsanto’s proprietary Roundup Ready genetically modified crops. Roundup destroys all life in the soil. It kills the microbes that would typically help in plant growth by providing nutrients and protection from diseases.

In 2015 the World Health Organization declared glyphosate as a probable carcinogen. However, regulatory agencies still debate the safety of Roundup for human consumption. The US Environmental Protection Agency now allows 50 times more glyphosate on corn crops than it did in 1996. In 2015 more than 220 million pounds of glyphosate were used in the US alone on edible crops such as GE corn and soybeans, processed foods with MSG, vegetable oils, high fructose corn syrup and animal feed. The more we use these chemicals to grow our food, the harder they are to avoid. With such widespread use of glyphosates, indirect human consumption has increased through drinking water and other plants, leading to a multitude of health issues.

Because of its effects on the immune system, farmers exposed to glyphosate herbicides have double the risk of developing non-Hodgkin’s lymphoma. Minimal exposure by inhalation of glyphosate, even at 450 times less concentration than that used for spraying, damages DNA in the cells. Glyphosate exposure is also linked to cancers of the thyroid, liver, pancreas, kidneys and urinary bladder. Glyphosate is known to be an endocrine disruptor. The endocrine system regulates metabolism, growth and development, tissue function, sexual function and reproduction, as well as sleep and mood. Glyphosate wreaks havoc on the endocrine system due in part to the levels that are legally allowed in drinking water. Scientists have associated glyphosate exposure with increased incidence of diseases such as celiac and Crohn’s, lactose and gluten intolerance, fatty liver, metabolic syndrome, and neurological conditions including autism, ADHD, and Alzheimer’s disease.

At the Dr. Rath Research Institute, we conducted a study to evaluate the effects of glyphosate on human cells at various doses.* We used human skin ﬁbroblasts to mimic a direct exposure to this herbicide through skin contact, and also kidney cells since Roundup has been indicated to increase the risk of kidney damage in workers exposed to it. We also tested different commercially available nutritional supplements, to assess their protective effects against the cellular damage caused by glyphosate exposure. Our goal was to determine whether any of them are sources of possible protection from the harm caused by glyphosate.

Our results conﬁrmed that glyphosate exposure is severely toxic to human cells. Apart from one supplement formula, the commercially available micronutrient formulas tested in this study did not show any protection against glyphosate damage. The one speciﬁc micronutrient combination that did show cell protective effects contained potent antioxidants such as vitamin C, green tea and plant extracts, quercetin, and others. The micronutrient combination in this formula was based on the principle of nutrient synergy.

The best way to protect your health against glyphosate and other herbicides is to avoid all genetically engineered and processed foods containing corn, soy, and canola. In addition to consuming organic food, people should also consider using scientifically researched micronutrient supplements. Furthermore, it is critical to build worldwide awareness and demand strict regulations against toxic agents such as glyphosate.