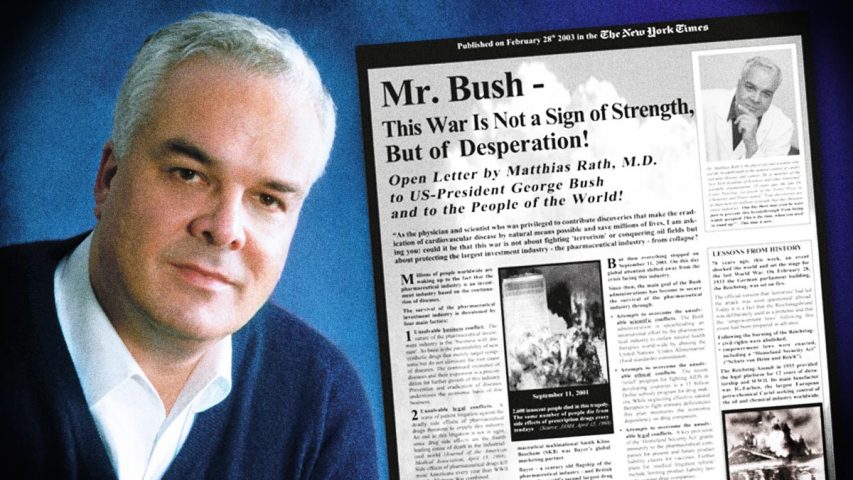 Since 2003, Dr. Rath has published over 40 Open Letters in the New York Times and other major international newspapers. Dealing with key issues relating to the Oil and Drug Cartel’s economic and political control of the world, they describe how the advent of new and superior technologies in the areas of energy and health are threatening the Cartel and will ultimately bring about its’ demise.

In this article, we look back at a selection of Open Letters and examine how the analyses contained in them have subsequently been proven to be correct.

On 28 February 2003, Dr. Rath published an Open Letter in the New York Times which described how, prior to 9/11, the pharmaceutical industry was facing the same grim fate as the tobacco industry. Faced with unsolvable business, legal, ethical and scientific conflicts, the end of this fraudulent industry seemed closer than ever. But the events on September 11, 2001, changed everything. In the aftermath of the 9/11 attacks, the George W. Bush administration sought to secure the survival of the pharmaceutical industry at all costs. The war against Iraq was to play a crucial role towards the achieving of this aim.

Rather than primarily being about fighting ‘terrorism’ or conquering oil fields, the Iraq War was launched as part of a long-term strategy of the Oil and Drug Cartel to create the necessary psychological state of fear for maintaining global control. Moreover, and crucially to this analysis, there is an important historical precedent for dramatic unexpected events like 9/11 being used as a pretext for the curtailing of democracy and the launching of war.

Citing the example of the burning down of the German Parliament building, the Reichstag, in 1933, Dr. Rath explained how the main benefactor of this fire was the IG Farben pharmaceutical and petrochemical cartel. Labeling this event as one of the key ‘Lessons from History’, he described how it provided the platform for 12 years of dictatorship in Germany and, ultimately, the launching of WWII.

During the ten years that have passed since the publication of this farsighted Open Letter, it has become an undeniable fact that 9/11 has been used as a means of justifying the curtailing of democracy, the creation and expansion of mass spying programs, and the threatening of sovereign countries with wars and murderous invasions.

From Pharma Fraud to Pharma Terror

On 2 September, 2004, Dr. Rath published an Open Letter in the New York Times entitled ‘From Pharma Fraud to Pharma Terror’. Describing how the Drug Cartel fraudulently misleads millions of people, he explained that the growth of the pharma industry depends on the continuation and expansion of diseases as markets for patented drugs. He also summarized how the Cartel has spent billions of dollars to buy strategic influence in medical education programs, health care provision, the media and politics. In the years following the publication of this Open Letter, a large number of books have been published which confirm that Dr. Rath’s analysis was correct.

On 6 May, 2005, Dr. Rath published an Open Letter in the New York Times which described how the HIV/AIDS tragedy has become a multibillion dollar market for the pharmaceutical business-with-disease. Summarizing how a community vitamin program conducted in South Africa found that micronutrients can reverse the course of AIDS, Dr. Rath stated that the natural control of the AIDS epidemic will ultimately destroy not only the Drug Cartel’s marketplace but also its entire credibility.

With the recent publication of an important clinical trial in the Journal of the American Medical Association (JAMA), which confirmed that long-term supplementation with multivitamins and selenium for HIV-infected patients in Botswana reduced the risk of immune decline and illness, not only has Dr. Rath’s research and analysis been proved correct but the end of the Drug Cartel’s multibillion dollar HIV/AIDS business is now within sight.

In an Open Letter published in the New York Times on 13 September, 2010, Dr. Rath focused on new technologies such as hydrogen, solar and other renewable forms of energy that have the potential to end mankind’s dependency on oil. Describing how such technologies will bring annual savings amounting to thousands of dollars for every family, millions of dollars for businesses and billions for national economies, Dr. Rath explained that this development will ultimately lead to losses amounting to trillions of dollars for the Oil Cartel – and eventually to its total demise. In this situation, the Cartel is prepared to use all means imaginable to prevent its own meltdown – even at the risk of drawing the whole of mankind into the abyss.

Promisingly, therefore, following our global Open Letter information campaign, mainstream media is increasingly being forced to admit that the Cartel was the key beneficiary in the Iraq war. As an article published on the CNN website in April 2013 describes, prior to the 2003 invasion Iraq’s domestic oil industry was fully nationalized and closed to Western oil companies. Today it is largely privatized and utterly dominated by multinational petrochemical firms.

In an Open Letter published on 22 September, 2011, Dr. Rath and Dr. Niedzwiecki announced the publication of their latest book, Victory Over Cancer. Describing how, for almost a century, cancer has been the target of the multibillion dollar pharmaceutical investment business, they explained that today, at the beginning of the 21st Century, for most types of cancer the annual death rate is still increasing and the skyrocketing financial costs of the disease are ruining millions of patients and strangulating the economies of entire nations.

With the natural health approaches presented in Dr. Rath’s and Dr. Niedzwiecki’s book having been shown to block all key mechanisms that make cancer a deadly disease, the widespread sharing of this information will pave the way towards turning cancer into a manageable health condition.

Significantly, therefore, a mere 12 months after the publication of this book, a major study published in the Journal of the American Medical Association (JAMA) confirmed that daily supplements of multivitamins may reduce the risk of cancer. The publication of this study was a further sign that the end of the pharmaceutical business-with-cancer is now inevitable.