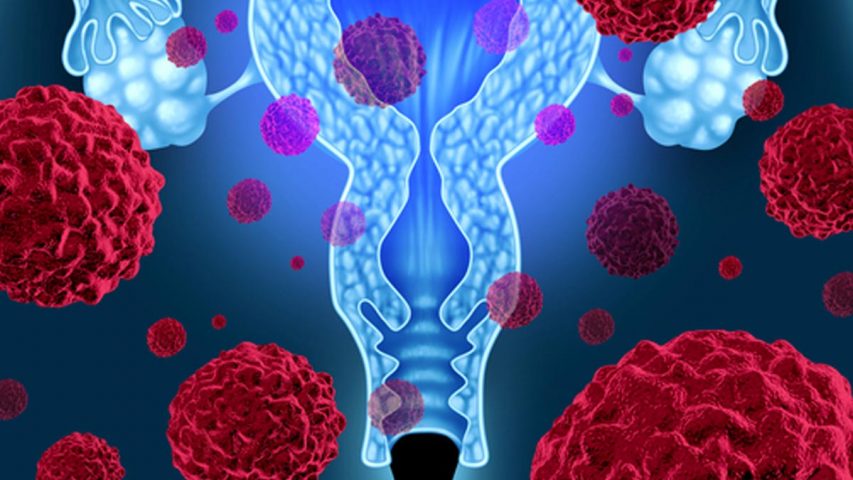 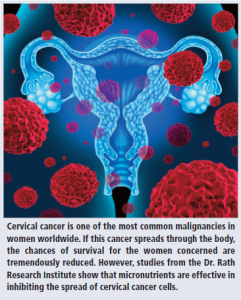 The cervix is the lower end of the uterus (womb) and is lined mainly with two types of cells: squamous cells and glandular cells. The squamous cells lead to the most common type of cervical cancer, squamous cell carcinoma. The glandular cells can lead to adenocarcinoma of the cervix. The development of cancer is a slow process; it usually takes 10-15 years for precancerous cells to turn into cancer. Smoking, obesity, long-term use of birth control pills, teenage pregnancies and multiple full term pregnancies increase the risk of cervical cancer. However, the most common risk factor is a chronic infection from specific types of human papilloma virus (HPV). Usually, there are no specific symptoms in the early and precancerous stages of the disease. Later, abnormal vaginal discharge, intermittent bleeding and pain during intercourse may indicate cervical cancer. Although cervical cancer can be treated effectively in the early stages, the outcome becomes poor as the disease spreads in the body (metastasis).

Similar to all other cancers, cervical cancer spreads by destroying the surrounding connective tissue using matrix metalloproteinase (MMP) and urokinase plasminogen activator (uPA) enzymes. We have documented that micronutrients such as vitamin C, lysine, proline, green tea extract and others can effectively block the development and spread of cancer cells by inhibiting critical steps in the process such as blocking MMP enzymes, reducing the growth of blood vessels that feed the tumor and strengthening the connective tissue matrix surrounding the cancer cells.

Our recent study¹ further confirms the efficacy of this micronutrient synergy approach in a living organism. It shows that, compared to the control group, mice subjected to cervical cancer develop much smaller and fewer tumors when their diet is supplemented with the specific micronutrient combination. In addition, cervical cancer tumors in the supplemented group of mice were less likely to metastasize as they were surrounded by a strong defined layer of connective tissue (capsule) that could form a barrier against the spread of the cancer cells. Such a capsule was absent in tumors in the control group. Moreover, the tumors that developed in the supplemented group of mice had more dead cancer cells (necrosis), thus indicating their regression.

For every woman the diagnosis of cervical cancer, especially in its advanced stages, poses a psychological, physical and financial burden affecting her and her family. This is particularly the case for women in the developing world. As such, this study, and our other results, further confirm that the road to developing a safe, effective, and science-based natural approach to cancer is wide open. This provides hope for thousands of women and offers an economically viable approach to health care economies in every country.