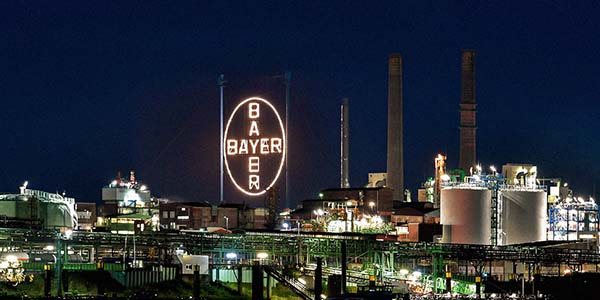 With Bayer now facing over 11 thousand lawsuits in the United States over the weed killer Roundup and its active ingredient glyphosate, Bayer boss Werner Baumann is continuing to claim his company’s purchase of Monsanto, the chemical’s manufacturer, was a ‘good idea’.

In August last year, in the first case of its kind, chemical giant Monsanto was ordered to pay $289m in damages to a former school groundsman who said working with Roundup, a glyphosate-based weed killer manufactured by Monsanto, had caused him to develop non-Hodgkin’s lymphoma, a form of cancer. While the damages were later reduced to $78 million on a legal technicality, Monsanto was subsequently hit with thousands more lawsuits from other patients who similarly say the chemical caused them to develop cancer.

Monsanto has since been purchased by Bayer in a $63 billion deal. Significantly, however, since the buyout, Bayer’s stock price has fallen by around 40 percent.

As such, with glyphosate having been cited by the World Health Organization’s International Agency for Research on Cancer as being “probably carcinogenic to humans”, and Bayer now facing potential lawsuit payouts totaling hundreds of billions of dollars, there are growing question marks over the company’s future. Viewed from the perspective of health-conscious citizens across the globe, however, Bayer’s demise would doubtless be seen as a cause for celebration and a positive step towards a safer food supply and a cleaner, healthier environment.