The Nazi Roots of the “Brussels EU” 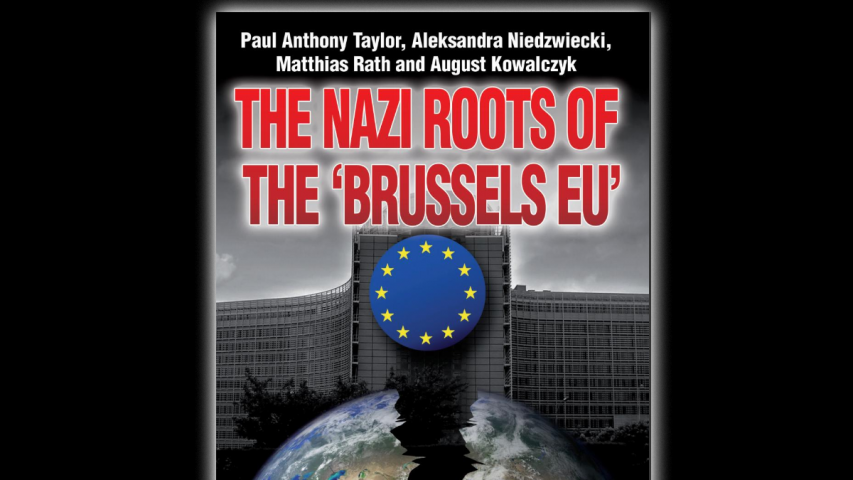 First published in 2010 and containing copies of previously unpublished historical documents sourced from international archives, “The Nazi Roots of the ‘Brussels EU’” proves that the key architects of the European Union were recruited from among the same technocrats who had previously designed the plans for a post-WWII Europe under the control of the Nazis. By revealing how the undemocratic nature of the European Union bears a notable resemblance to the intended post-war plans of the Nazis for a “total European economic area,” the shocking information contained in this book essentially marks the beginning of the end for the so-called “EU Project.” As such, mindful that the Europe of today is now teetering on the brink of economic collapse, the authors conclude by showing how the building of a new Europe – designed for the people and by the people – could lead to a world of health, peace and social justice becoming a reality.

References throughout the book refer to additional material collected on this page. The codes shown below can be found in the red ‘Further information’ boxes located at the bottom of pages in the book

The IG Farben Cartel Built Up the World’s Largest Extermination Camp (Page 48 and 49):

The Global Multi-Billion-Dollar Markets of the Chemical/Petrochemical/Drug Cartel (Page 25):

How the Oil and Drug Cartel Attempts to Control Europe (Page 14 and 15):

Ending Democracy and Returning to Medieval Times (Page 18 and 19):

The Nuremberg War Crimes Tribunal Against the Oil and Drug Cartel (Page 53):

Enforcing Drug Patents as a Key Element of Global Economic Control (Page 28 and 29):

From Ribbentrop to Guttenberg (Page 65):

The Stakeholders of the Cartel Deprived People of their Democratic Rights! (Page 23):

The Stakeholders of the Oil and Drug Cartel And How They Chose the President of Europe (Page 16 and 17):

The Master Architect of the Brussels EU – Walter Hallstein (Page 34 and 35):

The Nazi/IGFarben ‘Four-Year-Plan Office’: The Cartel’s Blueprint for the ‘EU Commission’ (Page 145):

Hallstein’s manuscript for his Nazi propaganda speech
Given in Rostock, Germany, on January 23, 1939
http://www.profit-over-life.org/books/books.php?book=54

Hallsteins Internal ‘Support Team’ for the Conquest of Europe via the ‘Brussels EU’ (Page 111):